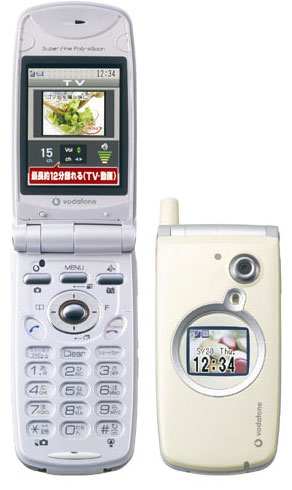 Vodafone K.K. announced after late April it will offer the V401T by Toshiba, a new handset that features a built-in analog TV tuner. The V401T represents Vodafone K.K.’s second analog TV tuner handset after the V601N by NEC was launched in December 2003.

With the V401T, customers can enjoy television broadcasts on a high-quality QVGA (320 x 240 pixel) screen. They can also record up to approximately 12 minutes of TV programming with the recording function and save still images with a capture function.

In addition, to prevent overuse, Limit Mode allows customers to set rules of usage for the V401T, such as limits on when the handset is used, restrictions on the amount of voice calls and mails to designated parties, and caps on call times and the number of mails sent.

The main features of the V401T are as follows:

The V401T features an analog TV tuner that makes it easy to view TV shows while on the move. Simple operations allow customers to turn the TV on and alternate between vertical and horizontal views with just the touch of a button. In addition, users can enjoy watching TV without worry as the V401T can confirm received calls or e-mails quickly while it is in TV mode. To prevent disturbing those nearby, the V401T comes bundled with a stereo earphone/microphone*1 with attached TV antenna that allows one to listen to TV audio even while the handset is closed. In addition, one can also listen to FM radio*2 broadcasts with the analog TV tuner.

*1: TV and FM radio audio is monaural.
*2: FM radio subject to noise based on usage environment.

* TV reception varies on strength of signal and in some cases TV visuals or audio may encounter static or not be
received.

The V401T comes with a recording function capable of recording a maximum of approximately 12 minutes of TV programming, making it possible to enjoy repeated viewings of memorable scenes. In addition, one can save a maximum of 9 TV still images by using the capture function.

*Images recorded with capture mode cannot be set as wallpaper or sent as mail attachments.

Limit Mode allows customers to set rules of usage for their V401T. With “limit access” one can set restrictions on phone, mail and web usage and with “limit time” usage times can be set. “Limit usage” allows one to cap call times and the number of mails sent. One can also restrict TV and FM radio use with “limit time”.