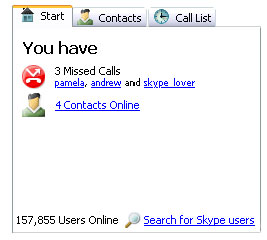 Skype Technologies announced its beta version of PocketSkype. A free software that will enable customers the ability to make global voice calls using their WiFi-enabled Microsoft PocketPC, for free. PocketSkype is a stripped-down version of Skype, and is developed specifically for PDA and other mobile devices. This makes Skype mobile and has massively expanded the universe of people who can now make free, unlimited, and unmetered voice calls to their friends, colleagues, and family all around the world.

Skype, the Global P2P Telephony CompanyT, allows people all around the world to make free, unlimited, excellent quality voice calls using their one-of-a-kind peer-to-peer software. This program is available in 15 different languages and is massively growing world wide, make it readily available to nearly everyone worldwide. Since it’s introduction to the world in August 2003, Skype has been downloaded more than 9.5 million times. Skype headquarters are based in Luxembourg, but is growing rapidly with personnel in Copenhagen, London, Stockholm, and Tallinn.

PocketSkype still has all the great features of its PC version including free Skype to Skype worldwide calling to any Skype user, ability to host and participate in Skype conference calling, instant messaging, access to the Global Decentralized Directory, and online contact lists. It is also very easy to download, install and operate. All you need is a PDA, an affordable headset and Skype’s free software to start making free voice calls.

“Expanding Skype to new platforms and giving our users more choice and flexibility is our priority,” Niklas Zennstrom, Skype CEO and co-founder. “We aim for ubiquity in offering value to all Skype consumers. The powerful combination of WiFi and free telephony using PocketSkype enables individuals to realize huge cost savings while mobile.”

WiFi hotspots (Public wireless LAN Hotspots) are projected to reach 167,000 by the year 2008. PDA sales are also expected to rise tremendously, during the next few years. At this rate it will only be a matter of time until we see people driving and talking to their PDAs. Looks like the PDA may become the new cell phone.