One-inch hard drives have mainly been used for storage in digital cameras, but now with the new price-reduction strategies, they are being used in more devices including mp3 players and mobile phones. The prices per storage capacity on hard drives (about 5000 yen or $48.37 US per 1GB) are much cheaper than with semiconductor memory, this is about one-tenth that of the price of semiconductor memory.

One reason why the use of one-inch HDDs in consumer handheld devices is increasing to rapidly is because of this price decrease. In addition, the manufacturers of the hard disk drives (HDDs) are trying to increase shipments by reducing the costs of assembly makers to even lower than market price. As a result of this the volume efficiency would cause the prices to drop even further.

These HDDs are mainly seen in MP3s players currently, however, with the current prices dropping to all time lows we can expect to see them in many more mobile devices, such as digital cameras, digital camcorders, PDAs (Personal Digital Assistant), and portable movie players. 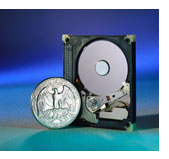 Most manufacturers are mainly aiming to have these hard drives in mobile phones soon. Not all are following along with this, Toshiba Corp stresses, “mobile phones are not the only target for the 0.85-inch HDDs,” even though many see mobile phones to be the biggest target for HDDs in the one-inch form factor.

Recently mobile phones were released with the capability of showing television shows using the semiconductor memory cards. It seems with this current trend and the high volume demand for it, hard drives use in mobile phones are inevitable.

In addition to all of this, mobile phones offer greater volume efficiencies than digital cameras or MP3 players. This is another great reason in favor of placing the new HDDs in mobile phones.

Hisatsune Watanabe, associate senior vice president and executive general manager of NEC’s Central research Laboratories acknowledges that “the idea of using HDDs in mobile phones is basically (a move) in the right direction.” Watanabe was involved in the development of the card-shaped mobile phone, released in February 2004 for the Chinese market. Johnny Fukuda, head of GS Magistar’s overseas sales and marketing, stated intentions to “first target the Chinese mobile phone market, then head into the Japanese market.”

Despite all the expectations of incorporating the 0.85-inch HDDs into mobile phones, it seems to be much harder than originally expected. With higher restrictions on anti-shock and power consumption, along with other obstacles this is not going to be a very easy task.

The first obstacle to overcome is the thickness of the drive, 5mm. This would put the already 20mm – 30mm mobile phones out to 25mm – 35mm, which is thought to be impossible. One major factor in the 5mm thickness of these drives is the spindle motor and according to Shinichi Yamamoto, head of the new business development at Hitachi Global Storage Technologies LTD (HGST), it is very difficult to make the spindle moter smaller for the one-inch drives.

Even with this first obstacle, Toshiba has made strides in the right direction, making their 2gb drive only 3.3mm, 2/3 of the conventional size. This is only one step, as they had hoped to get it down to SD memory card size (2.1mm) or smaller.

Another one of these obstacles is the higher restrictions for anti-shock. According to Yamamoto, “MP3 players are required not to break even when they are dropped from a height of one meter (3.28 feet), but for mobile phones, the requirement becomes 1.5 meters (4.92 feet). This is very difficult with the current technology.”

All of these challenges have to be overcome before any of the HDDs manufacturers can reap any of the rewards. However, once overcome, the current demand suggests very high sales expectations.