Matsushita Electrical Industries has just announced the new TH-LB10NT LCD projector supporting up to four seperate PC connections via wireless LAN. Set to go on sale in Japan near the end of April, the 400,000 YEN device is only 2.2kg and has some amazing featres.

The TH-LB10NT mobile projector is the first in the world to support wireless connections to up to 4 PCs simultaneously. Also, using a wireless load dispersion technology independently developed by Matsushita, the projector includes the ability to display and operate the 4 PC’s screens simultaneously, through the function called “Multi Live Mode.” This means that one can conduct presentations from each PC without having to change PCs, or even clown around with cabling. The wireless standard 802.11b is used, and AES encryption is supported.

The system features a speed start function to go from “power on” to “project” in a mere 5 seconds, as well as a direct power-off function that allows one to disconnect the projector from an electrical outlet as soon as they are done using it.

The resolution is 1,024 x 768 (XGA), and it supports image reduction of resolutions up to 1,600 x 1,200 with a brightness 2,000 ANSI lumens. The 500:1 contrast ratio uses “Projector AI Circuitry” that controls the lamp brightness according to each displayed scene. 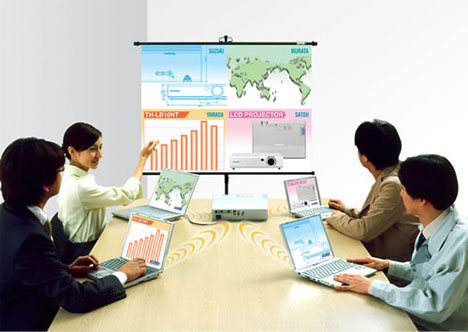