Nintendo has plans to release a collection of classics from the original NES, for Game Boy Advance and Advance SP. Even though these games from the 80s were blocky with very basic sound effects, they were fun as hell and awesome to play. Some of us grew up on these games, and having them once again would be a treat.

The games in the Classic NES Series will be released June 7th, 2004. Excitebike is one of my personal favorites, can’t wait to pick that up for $20.

The classic games to be released are; Donky Kong, Pac-Man, The Legend of Zelda, Super Mario Bros, Excitebike, Ice Climber, Xevious and Bomberman. 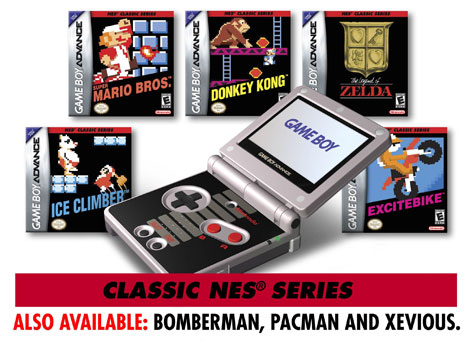