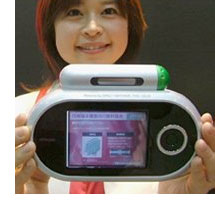 Hitachi today unveiled the prototype fuel cell powered PDA. The device will run for about five hours on a single charge but Hitachi expects to extend this by the 2005 launch date.

The prototype weighs about 700g, twice the weight of conventional PDAs, but Hitachi also plans to reduce this. In fact, who knows if it will anything like the prototype photo they released. Fuel cell technology has been an alternative source of energy for some time now, unfortunately no one has brought it to market yet, it works by generating electricity from hydrogen and methanol combined with oxygen, the only waste will be pure water.

Methanol is used for the source of hydrogen in the fuel cell for Hitachi’s prototype. Although it has a greater cost then that of traditional power sources, it is completely 100 precent pollution-free.