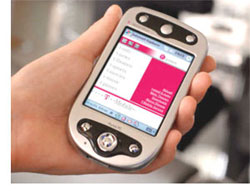 The MDA2 or XDA2 Pocket PC phone (depending what region you are located) is one I have had my eye on for quite some time now. Sporting a very large 3.5 inch screen, camera, 400 Mhz processor, 128MB on-board RAM and SD expansion all wrapped in a GSM phone, well, it just makes my mouth water. The original MDA, although an impressive achievement, had left me wanting. Looks like they did it right this time.

I’ve decided to write this review with a focus on the device’s day to day useability. For benchmarks and detailed specs, have a look here (or the insides, click here). To get a feel for what it’s really like to own this uber phone…read on!

Right out of the box, one is struck by the 3.5 inch TFT transflective (65,536 colors) screens real estate. The front buttons are for Contacts, Calendar, Call Answer and Call End as well as a directional pad. A look around the edge of the device reveals hardware buttons for power, voice recording, volume control, camera shutter, soft reset hole, sync connection and protected headphone plug. In addition, there is an SD expansion slot and IR port. The back of the camera houses the battery cover, VGA F2.8 camera and external antenna jack. The unit comes in at 19mm x 69.9mm x 130mm and 190g and is comparable in size to an iPaq 5550.

As a tri-band Bluetooth phone as well as a PDA with built-in camera, the MDA2 was easy to set up. I slid off the rear door, took out the battery and slid my SIM card in. As expected, it was immediately recognized and I was ready to go after about 20 seconds. Having already installed the included Active sync software on my PC, I plugged the unit into its charging cradle (with spare battery port), and plugged in the USB connection. The setup was as simple as the Palm variety (a far cry from the tear-your-hair-out Windows CE days). The first sync took a few minutes and ended without error. Like most GSM folk, I also have a gaggle of phone numbers on my SIM card which may or may not be in my Outlook contacts. The unit comes preloaded with SIM manager software which allowed them to be copied to the contacts list in a snap. I then let the unit charge for about 3 hours before grabbing the supplied leather-like case and giving it the once over. 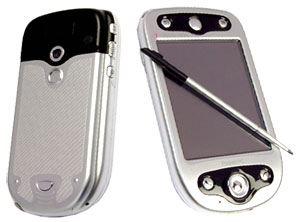 The included case is just terrible. It makes the device about as thick as my wife’s wallet. I’m sure this is done as a form of impact protection however the unit is virtually immune to impacts since I won’t leave the house with it in there. The unit is loose enough in the case to allow the camera opening at the back to sometimes partially cover the lens. All of a sudden a cute video of my son playing with Thomas the Tank Engine looks like a hidden camera peep show. The device is big for a cell phone and needs something like an iSkin or this custom case mod. Instead I chose to slap on a clear screen protector, empty out my pant pocket, and go caseless. Without the case, its generally thin enough not be particularly noticeable in the front pocket of my Khakis (Dear Scott E-vest….you missed my birthday). So out the door I go, leaving my current phone, the Treo 270, to sit around and watch the house.

While heading over to see friends, I noticed that this phone allows you to assign a picture to the caller ID. Using the device camera, I spent the first few hours snapping a few less than flattering shots of all the usual suspects. One can also simply use any image you download to the device but that just isn’t half as much fun as doing it on the sly.

I take a walk around town and get my first incoming phone call about a half hour later. The unit has super crisp and loud ringtones (PDA and Phone volume can be adjusted separately) and the “antique” ringer I picked was just plain uncanny. A good shot of my brother in mid sneeze pops up, and, after a brief chortle, I tap the on screen answer button. The screen is amazingly clear even in direct sunlight and the voice quality is great. While chatting, I decide to see if I can record the conversation (he may end up in politics some day and I have a Visa to pay). I hit the external voice recorder button and “tape” for about the 30 seconds. I soon find out that although the voice recording quality is great, it only records my side of the conversation. Like a few other Smartphones out there, I was however able to do just about everything the device could offer, including taking pictures, reading my notes etc, while talking on the phone.

My second favorite thing about any phone is SMS. I talk to friends and family around the world with it and I really don’t know how I ever went without it. The device can handle both SMS, MMS and Video MMS however I have yet to have anyone able to try the latter two. One thing I didn’t like in the phone was the inability to send SMS to an e-mail address. This is a capability I enjoy on my Treo 270 which was sorely missed. I could either send e-mail via device synchronization or use the GPRS connection. Sending e-mail via SMS is dirt cheap and fast, that’s why I like it.

This is also an area where I have always felt a thumb board is best. I got hooked in the early “crackberry” days and I can’t live without it today either. Given that this device is designed around the awesome screen real estate, it was simply not an option. So you can type out SMS with the stylus (a nice one by the way) on a virtual keyboard or use the block recognizer, letter recognizer or transcriber. My handwriting is beyond illegible to me, let alone the machine, so I opted for the on screen keyboard. My preferences being what they are, it was still faster than texting via the dial pad.

Up near the local pub, I decide to try an outbound call. I tap the green Call/Phone App button and a virtual dial pad pops up. The keys are sized in spaced in such a way that I had no trouble dialing. Aside from the usual keys, there are keys for your speed dial numbers and call history. Once again, the virtual keys are large enough to allow you to simply tap with your finger. The device came with several “Skins” and you have the ability to get more on-line.

As I approach the locals beach, I decide to record a video clip of the ice buildup along the lake edge. Welcome to Ontario in March. The folks who designed this puppy did some thinking here. Once you go into camera mode (either camcorder or camera), the buttons on the front of the device change to control image orientation, zoom, effects, capture quality and file type. It quickly starts to feel like one of those devices you just can’t live without. On the way back home, I write up an e-mail to the folks, attach the picture and hit send. Once I get home I drop the phone into the cradle and the e-mail is sent out via my Outlook software as part of the sync. About 10 minutes later I get an SMS message from somewhere just south of the equator. It’s a group of the letters “H” and “A” arranged in an annoyingly repedative fashion.

Not wanting to incur the monster charges of a transatlantic call on my cell phone (I went landline-free a few years ago), I instead record a smarmy response about quarter pound mosquitoes with the voice recorder, attach it to an e-mail and send it back to them on the next sync.

Sitting down at my laptop, I decided it was time to take advantage of some the media advantages of modern PPC’s and load up on content. Since few players will play all formats and bit rates, and mine vary dramatically, I ran the clips through the very free Windows Movie Maker 2 software on my laptop. I then drop the files onto the handheld and see how it works. Sure enough, the clips played beautifully. I loaded some tunes onto an SD card and put it in the handheld before making my way to the local Costco for a drool session. As usual, the lines on a Saturday are brutal and I made the best of the opportunity to watch a movie clip on the unit. Much like most PPC’s made in the last two years, it does a very decent job of rendering video. A nice feature of this particular unit is the advantage of screen size when watching the clip in landscape orientation. Controls were of the simple Windows Media variety. On the audio side, the music quality was good via the provided earbuds and playlist setup was a total breeze. Playing music via the unit’s own speaker is remarkably loud (my apologies to the nice lady who was in line in front of me when I pulled out the earbud) although obviously limited. It is however pretty functional when listening to audiobooks. The use of earbuds on this unit is limited due to the proprietary plug used to support the in line Call Answer, End Call and volume control. I spent the better part of the day using a hands free kit (you usually couldn’t catch me dead with one).

Back home later that night, I took the time to go through all of the usual PPC apps (Windows Mobile 2003) and the large variety of third party apps loaded into the ROM. These include such as the already mentioned camera software, Phone and SMS apps, Text and PDF readers and more. For a complete list and details, look here. Basically, it’s a high end PPC and does everything you would expect in that regard.

This device IS the big ticket uber phone for the PPC enthusiast. If you carry a PPC with you all the time, then getting this one will replace your high-end camera phone as well. If your budget allows for this kind of green to be spent, and boy I was nervous carrying this thing around without a protective case, head on over to Dynamism and check it out.