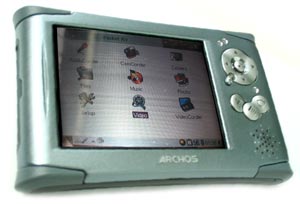 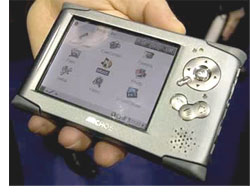 If this will indeed be called the AV500, Archos has done a nice job on the successor of its AV300 series. With a slimmer sleeker more ergonomic look, the AV500 makes the AV320 look like a clunky has-been. The new PVP and PDA combo device with docking station will be released before the end of 2004, and is around the same size as a Jornada Pocket PC. No exact dimensions were released, although Archos assures us that it’s amazingly small.

The 20 and 40GB devices use a 704×480 30fps maximum resolution screen, aside from standard DivX and MPEG4 playback, it will even play games and just about anything else you can imagine. Archos hasn’t forgot about the big boss either, they have added Microsoft DRM support for WMA and WMV9 video format, and synchronization with Microsoft Windows Media Player. It also has an external speaker and microphone.

This will be the first PVP/PDA device on the market (unless someone beats them to it) supporting standard PIM applications (Email, Calendar, Notepad, Calculator etc.) plus an internet browser. The unknown connection method will support Ethernet, WiFi, Bluetooth, GSM and other add-on cards.

For the gadget guru always needing to back-up some data, this will feature dual USB 2.0 ports for direct camera to device transfers of your image files, it will also be a fully functioning multi-media reader. Archos also added EPG (Electronic Progamming Guide) technology, to allow you to control the AV500 with a remote control as a video player/recorder.