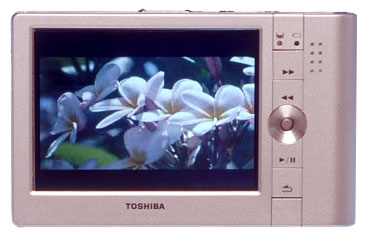 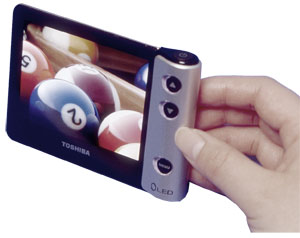 Toshiba also released two very cool handheld devices for consumers at the CeBIT 2004 show today. The Mobile Viewer is a multimedia player with a 3.5-inch LCD and 1.8-inch 20GB HDD that can store up to 80 hours of video. With an optional one megapixel camera module, the device turns into a still picture and video recorder. You can also dock this thing into a cradle with stereo sound speakers transforming the Mobile Viewer into your mini entertainment unit.

The Mobile Viewer is very similar to the Archos AV300 series devices, with a detachable camera module but lacking a much needed docking station.

The SD Card Viewer consists of a 3.45-inch Organic LED (OLED) display, this next-generation flat panel screen will give users a brighter, sharper more vivid picture then today’s LCD’s. The Organic LED has an incredibly fast refresh rate, unfortunately it is still a concept but may be seen in units as soon as 2006.