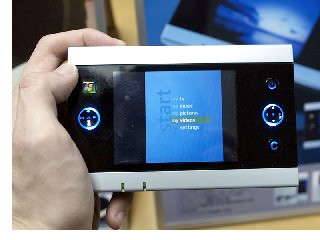 The PMC-100 from iRiver is expected to be released in Europe by the second half of 2004. This sleak silver portable media player will support the Microsoft Windows Mobile based operating system. Specifically designed for people on the go who like to enjoy digital movies, recorded TV, photos and music on a handheld device.

Microsoft announced the news at CeBIT 2004 that iRiver and Creative Technology will release their portable media centers this year. Content will be provided from leading European entertainment companies EMI Music and Napster LLC, for the Microsoft Windows Mobile -based Portable Media Centers.

Microsoft will localize Windows Mobile software for Portable Media Centers to allow manufacturing partners to ship devices in Europe, Asia and North America in the second half of 2004.

“Following the phenomenal success of digital music players, adding video and photo-viewing capabilities is the natural next step in personal entertainment,” said Paul O’Donovan, principal analyst in the Consumer Applications and Emerging Technologies Group at Gartner Inc. “Music videos are one example where video capabilities will be compelling, especially to a whole generation of European consumers that watch music TV. I believe that if the price is realistic and the right video content is available, shipments of this type of device could rival music-only players by the end of 2007.”

“Creative and Microsoft have worked closely together to bring this exciting new era of digital entertainment to reality,” said Sim Wong Hoo, chief executive officer at Creative Technology. “With devices like the Creative Zen Portable Media Center, people can quickly and easily transfer video, music and photos from a PC, creating a whole new way for people to enjoy their entertainment.”