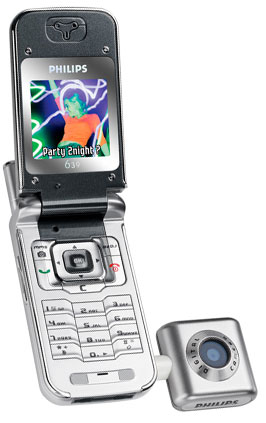 Philips has applied PolyLED technology in the Philips 639’s sensational ‘Magic Mirror’ display screen on the outside of the phone’s clamshell design.

The Organic Light-Emitting Diode provides a clear mirror – ideal for consumers who need to check their appearance on the move. As soon as the phone receives a call or a message, the mirror becomes the display. This can be further discovered on the phone’s primary high-resolution 65K colours TFT display.

The Magic Mirror is also a versatile display screen, capable of showing a variety of animations. The display also provides a unique ‘window’ on incoming calls: the Mirror feature or the identity of a caller can be seen through the mirror with the phone’s new IconCall feature which allows fast, easy identification. This new PolyLED screen is a further example of Philips’ leading display technology which brings significant benefits to users of mobile phones and other personal electronic devices, both by providing useful new functions and strongly enhancing consumer appeal.

The new Philips 639 has a distinctive clamshell design, rounded edges, with a metallic and chrome finish that reflects this phone’s up-to-the-minute technology. The phone is available in a choice of three exciting new colour finishes: Magical Pearl, Surprising Green and Fantastic Grey.

The Philips 639 is a super-compact, easy pocketable mobile phone with an exceptionally lightweight of only 85 grams. Operating times are up to 4 hours talk time and up to 400 hours – more than 16 days – standby time. IconCall and FotoCall for instant caller identification Sending photos with personalized MMS messages isn’t the only way to enjoy them on the new Philips 639.

It’s also possible to use them with the phone’s FotoCall feature. This illustrates the phonebook for instant identification of different caller categories, so that when the phone rings the corresponding photo appears on the main display, while a dedicated icon appears on the Magic Mirror. And with 32 polyphonic ringtones, personalizing the phone isn’t limited to photo display – there’s also plenty of choice in the sounds used to announce incoming calls.

The 355 phone also includes Philips’ unique BeDJ application, which lets users create, store and share up to nine distinctive music mixes from either downloaded WAP sources or MMS (operator service dependent), or tracks and sound embedded in the phone.

As a real-time composer, BeDJ brings out the creativity in people, with its Music Mix Panel enabling users to mix up to nine tracks, choose an instrument for each music track, change the tempo and volume of the sound and share the results with friends via MMS (Multimedia Messaging Services).
With the Philips 639’s optional VGA ‘Night Mode’ camera, it’s easy to take photos and add them to MMS messages in just a few clicks. With a built-in 2x digital zoom function it’s much easier to take clear, close-up photos every time. And thanks to the phone’s mega-memory, it’s possible to store more photos than ever before for instant recall whenever you want to view them or share them with MMS messages. As well as taking your own photos, the Philips 639 comes with a big selection of embedded pictures to use as a starter kit for MMS messages, wallpaper backgrounds and screensavers.

The new Philips 639 mobile phone will be introduced in the course of the second quarter of this year in selected countries.