Vodafone UK has launched a phone that will allow hearing or speech impaired people to hold real-time convsersations. The Nokia 9210i handset will sell for £240 and £380 depending on the price plan selected, and will be pre-loaded with RNID textphone software letting users communicate via the phones keyboard. A textphone call will cost £0.14 as compared to £0.35 for a voice call, kudos to Vodafone.

A mobile phone has just been launched which allows deaf, hard of hearing or speech impaired people to hold real-time, interactive conversations whilst on the move. The mobile textphone is being marketed by Vodafone UK with award-winning software developed by RNID, the largest charity representing the nine million deaf and hard of hearing people in the UK.

This service improves deaf people’s ability to make any call, from something as crucial as contacting the emergency services to making a simple enquiry about goods or services. It also allows interactive text conversation similar to speaking on the telephone, where users can interrupt and enjoy the immediacy of dialogue. 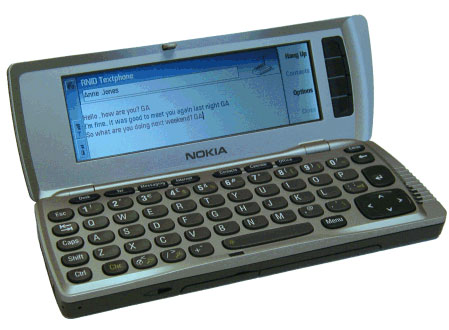 Dr John Low, RNID’s Chief Executive says: “It is a triumph to see phones once again being used as they were intended – to empower deaf people. Alexander Graham Bell began by developing a microphone to help his deaf mother hear. Had he not been so keen to bring down barriers for deaf people, phones as we know them might not exist.”

The new mobile textphone allows two people to communicate by phone using text in real time. The textphone has a keyboard and display screen, and instead of speaking into a mouthpiece the user can type what they want to say and read the reply from the screen. A deaf person can communicate with a hearing person using any ordinary landline or mobile with the help of RNID Typetalk. Any Vodafone UK customer can now call textphones on any UK network using the BT TextDirect pre-fix 18002. Realtime interpretation between text and voice is provided by the national Relay service RNID Typetalk. Using a Nokia 9210i handset pre-loaded with RNID textphone software, Vodafone Mobile Textphone customers simply pre-fix their call with 18001, the BT TextDirect prefix and they will then be able to:

• Use the 18000 shortcode for contacting Emergency Services.

• Call subscribers who have an ordinary voice phone via the national relay service, RNID Typetalk, whose trained operators translate between voice and text.

• Call subscribers on other networks who use landline or mobile textphones.

• Access the service on both pay monthly and pay-as-you-talk, offering wider customer choice.

• Pay no more than a voice customer for calls from a mobile textphone.

Guido Gybels, Director of New Technologies at RNID says: “Technology brings exciting opportunities, yet unless the needs of all users are incorporated within the mainstream, barriers are erected which prevent millions of deaf people from participating in the Information Society. But thanks to operators such as Vodafone, deaf, hard of hearing and speech impaired people are a welcome step closer to enjoying the same availability, prices, service and choice as everyone else.”

“It is Vodafone’s policy and practice not to define customers by their disabilities and as far as possible, to provide equal access and equal choice to all customers,” added Lance Batchelor, Marketing Director for Vodafone UK Limited. “We truly believe that this service, which requires no registration and offers equivalent pricing, ensures that mobile conversation is now available for all members of the world’s largest mobile community.”