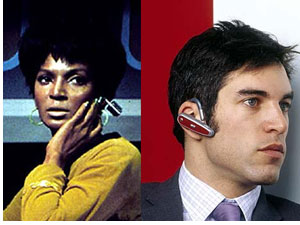 It is interesting to see which futuristic personal technology gadgets in the voyages of the starship Enterprise have turned into reality.

“When I designed the UI (user interface) for the Palm OS back in ’93, my first sketches were influenced by the UI of the Enterprise bridge panels,” said Rob Haitani, product design architect for Palm-One Inc., the Milpitas firm that makes the popular handheld personal computers.