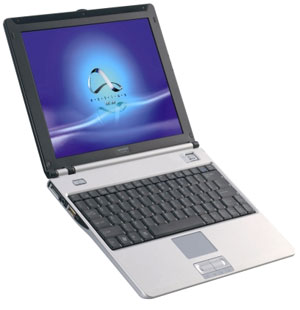 Sharp Systems of America today introduced a new notebook to their Award-winning Actius notebook line. Following the success of the Actius MM10, Sharp is introducing the Actius MM20, hailing the introduction of Transmeta’s Efficeon processor to the U.S. market. The ultrathin, 2 pound Actius MM20 offers an array of upgrades and improvements from the previous Actius MM10, offering all-day computing capability, ideal for knowledge workers or students on their corporate or college campus.

“Building on the success of the Actius MM10 and listening to the feedback that we received on its ground breaking design, Sharp has built the cutting-edge and full featured Actius MM20,” said Greg Nakagawa, senior vice president and general manager for Sharp Systems of America. “Fans of the Actius MM10 will find enhancements in the Actius MM20 in performance and function, while new users will be treated to a satisfyingly powerful and portable computing experience. The Actius MM20 is ideal for the highly mobile business user or student who needs maximum portability and productivity in a notebook computer as they travel from appointment to appointment both in and out of the office.”

“Sharp’s strong commitment to innovation is clearly visible in the new MM20,” said Arthur L. Swift, senior vice president of marketing. “The ultrathin and light MM20 represents an ideal showcase for the outstanding performance and energy efficiency inherent in Efficeon.”

“The Transmeta Efficeon TM8600 processor provides exceptional computing performance, coupled with efficiency in battery life and a quiet, fanless design, making it an ideal processor for the ultraportable Sharp Actius MM20 form factor,” said Terry Hanly, product marketing manager at Sharp Systems of America. “Actius MM20 users will be delighted with the amount of computing power that they have in a unit so incredibly thin and light, and will be satisfied with the amount of time that the battery life will allow them to use it.”

Weighing in at only 2 lbs and just 0.62 inches thick, the quiet, fan-less Sharp Actius MM20 notebook computer is designed for users who need fast and reliable computing in a highly mobile environment. Equipped for wireless connectivity via integrated 802.11g Wi-Fi, the Actius MM20 notebook provides users with a lightweight, wirelessly enabled notebook that serves as the perfect adjunct to a desktop machine through the functionality of DirectHD technology and SharpSync Powered by Iomega Sync.

“By connecting the Sharp Connection Cradle to another computer (for instance, a user’s desktop PC) via USB 2.0, users are able to take advantage of DirectHD technology, which allows the Actius MM20 to be accessed as though it were another drive on the connected computer,” explains Hanly. “Users are able to then transfer files back and forth at will, making the Actius MM20 an ideal ‘satellite’ notebook that can be carried from appointment to appointment, while maintaining data consistency with a user’s main work station.”

To make data consistency even easier, Sharp has partnered with Iomega Corporation to develop SharpSync. Powered by Iomega Sync software, SharpSync allows users to pre-select folders that they would like to keep in sync between the Actius MM20 and another computer. Once these folders are assigned, the Actius MM20 automatically syncs the selected folders between machines when connected to the provided Sharp Connection Cradle or through a DirectHD connection cable (sold separately). This enables a multi-PC usage model in which users are able to maintain data consistency seamlessly with other computers.

Another performance enhancement to the Actius MM20 includes the addition of twice the amount of memory of its Actius MM10 predecessor. Now including 512 MB DDR SDRAM(24MB shared with system memory), the Actius MM20 is able to take advantage of the increased processing power of the Transmeta Efficeon processor and allow users to multi-task more effectively and efficiently.

The Actius MM20 also provides a substantial improvement with the addition of the ATI MOBILITY RADEON video controller with 16MB of dedicated video memory. The addition of dedicated memory means that the Actius MM20 will not have to siphon memory from system memory in order to display graphics, and users will be able to run 3D and other graphics intensive applications on the MM20.

As an added enhancement to the long battery life that the Actius MM20 boasts, Sharp has included a ‘Mobile Mode Switch,’ which provides users with an energy saving option. When in use, ‘Mobile Mode’ decreases the brightness of the display and the frequency of the processor to extend the life of the battery for when a user might need it most.

The Sharp Actius MM20 is competitively priced with an estimated street price of $1499.00