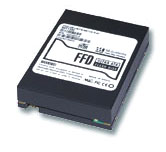 M-Systems today released a new solid-state flash disk with Ultra ATA interface in a 2.5″ disk casing up to 90GBytes costing about $40,000 USD. The disk is targeted to military operations, who else could really afford this?

The FFD 2.5″ Ultra ATA is an ATA-6 flash disk with an interface speed of 100MB/s, supporting Ultra DMA 5 transfer mode. The Ultra ATA complies with the MIL-STD 810F and NEBS level-3 standards and is capable of operating at high altitudes, through extreme shocks and vibrations and at high temperatures common in industrial applications.

“The FFD 2.5″ Ultra ATA provides five times the performance of the FFD IDE Plus and is designed for applications that need the fastest read write rates such as video recording,” said Ofer Tsur, M-Systems’ marketing manager for FFD products. “The ability to offer higher capacities in slimmer casing makes the FFD Ultra ATA an ideal solution for rugged laptops, tactical computers and other demanding applications.”