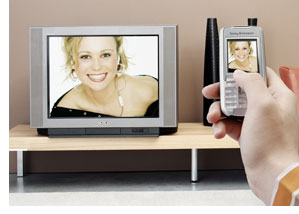 The Media Viewer MMV-100 takes Bluetooth wireless technology to a new level and expands the number of ways images and audio can be transferred between devices. The MMV-100 plugs directly into a TV or digital projector, to allow users to send images from a mobile phone to a large screen via Bluetooth wireless technology. The Sony Ericsson MMV-100 will be available in Q2 2004.

The Media Viewer can be used as a fun way to share images with families and friends or as a light-weight business accessory for slide shows. Images and audio are transferred from the phone by one simple touch of the phone key pad.
It can be used with TV or digital projector and expands the concept behind Bluetooth products. Instead of pairing one phone with one Bluetooth device, the MMV-100 can handle ‘many-to-one’ connectivity, meaning several people can use their phones to transfer images to one screen. It also enables the transfer of AMR and MP3 audio files directly from a Bluetooth-equipped mobile phone enabling music files to be enjoyed through the superior sound quality of a television’s speakers.

In addition, the MMV-100 is also an easy-to-use work tool. Presentations saved as images and stored on a mobile phone such as the K700 or S700 can be transferred via Bluetooth to a bigger screen in a meeting or conference room.

The MMV-100 supports the following Bluetooth profiles: File Transfer Profile (FTP), Object Push Profile (OPP), and Basic Imaging Profile (BIP). It can be used with the Sony Ericsson phones K700, S700, P900, P800, T630, T610 and T68i (functionality may vary depending on phone). The MMV-100 connects to a TV or projector through the SCART or via stereo audio/video RCA cable and there will be variants for both PAL and NTSC formats.