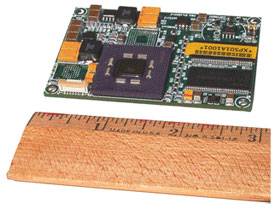 General Micro Systems today announced the world’s smallest single-board computer (SBC), the Spider. Capable of booting directly to Linux or VxWorks-Tornado II from onboard Flash, the Spider occupies 30% less space than a credit card, and consumes as little as 4W of power.

The Spider comes in two flavors: a low-power version (the P501) based on IBM’s 400-MHz 440GP; and a high-performance version (the P502) based on IBM’s 800-MHz PowerPC 440GX. Both modules come standard with two Ethernet ports (10/100 Base-TX for the P501; Gigabit Ethernet for the P502), which makes them easy to connect to other Spider modules, external packet switches, and other systems equipped with Ethernet ports. Both Spider modules come equipped with 256 kbytes of L2 cache, up to 256 Mbytes of DDR SDRAM, 16 Mbytes of boot/user flash, and 32 kbytes of user ID flash. They also provide two serial ports, an I 2 C port, a real-time clock (with field-replaceable battery), and a 32-bit Device-bus with DMA, which enables designers to add their own custom I/O without a PCI interface.

Spider’s self-booting capability enables it to function as a standalone (bus-less) SBC, making it ideal for hand held as well as deeply embedded applications such as engine control and missile guidance. This standalone capability can also be used to enhance reliability in telecom and defense applications that require the processing of large numbers of independent channels (i.e., call processing or phase array radars). Because the Spider modules are equipped with their own processor, memory, real-time clock, and power source, they are relatively impervious to single points of failure that occur in traditional multi process blade servers. This “share nothing” approach makes Spider ideal for creating redundant, multi-channel, fault-tolerant, field replaceable systems that provide exceptional reliability and availability.

To enhance standalone operation, GMS offers a family of I/O modules that bolt directly to the Spider module in PC-104-like fashion. The LimI/O-1 module, for example, provides 15 digital I/O lines, three of which can drive high-current loads like large DC relays/lamps. The module also provides two RJ-45 ports for Fast or Gigabit Ethernet, one RJ-11 port (for RS-232), one RS485 serial port, an I2C port, and a memory socket for up to one Gbyte of additional mass storage. Other LimI/O modules under development include FPGA I/O, 802.11g wireless Ethernet and LVDS I/O.

Software support for Spider includes VxWorks-Tornado II and Linux. Both operating systems boot directly from the onboard Flash, eliminating the need for rotating media or network booting.