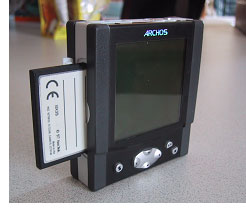 I decided to wait until after the holidays to get a new hard drive MP3 player. As some of you may know, I get quite a bit to play with, I wanted to use this opportunity to make sure I got the best value for my dollar.

After dozens of try-outs, I soon found myself set on the iPod. I had played with it before and had not yet found anything else that really compared. Yes, it was expensive, the 20GB iPod goes for $399 USD, but what else is out there that is so compact, well built and easy to use? I loved the idea of the optional Belkin iPod Media Reader ($99.99 USD) for storing pictures from my camera while on the road. And even the Belkin iPod Voice Recorder ($39.88 USD) Microphone adapter for recording my rather long-winded speeches, it was all I needed. At a grand total of $540 USD before taxes, it seemed like the answer, and it was, until… Archos sent over the $299 20 Gig GMini 220 (At J&R).

We noted the GMini back in September 2003, but it only hit the store shelves back on January 7, 2004. I finally got my hands on it two weeks ago.

Please note: I am buying the GMini 220. I absolutely loved it and chose it without hesitation over the iPod. Some ask why I often use the iPod as a benchmark. The fact is, Apple kicked some serious ass in the portable music player department and it’s taken a long while for the competition to catch up. Kudos to them for what they accomplished. Now with that said….Here’s why I chose the GMini 220;

1. Size: The GMini 220 is small….very small: 67.5 x 78 x 23 mm and 170 grams. As you can see from the shots below it fits comfortably in the palm of my hand. The unit wears that same solid construction feel and minimalist design which first drew me to the iPod. The 2.5-inch 160×160 blue backlit screen is easy to read and takes up the majority of the devices front side. It sports a set of rubberized-bumpers, these keep the unit from being scratched when moved across a surface.

2. Music playback: The sound quality is excellent. It plays both MP3 and WMA at up to 320 kb/s and buffer large enough that I could never get it to skip (jogging, biking……country fair mime?). The devices volume control has a wide audible range, and the built in customizable equalizer works very well.

An optional in line remote and FM tuner ($49.00 CDN) allows you to control the player and record FM radio directly into MP3. The internal buffer allows you to record an entire song even if you hit the button up to 30 seconds after it started. The LCD lets you do it all while keeping the player safely in your pocket. Compare that with the not so exciting four button iPod version.

3. Navigation: The GMini’s OS let’s you do a lot of things directly on the device that you just don’t see on other players. Although it comes with Musicmatch software, this allows you to organize your music and create playlists on your PC, you can also do it on the device itself. With my feet kicked up at the local Starbucks, I can browse by genre, artist, album or year and create playlists on the device using the very intuitive “Double Browser”. You can also delete, and rename files as well as bookmark your place in a particular track. This is excellent for anyone into large file audiobooks, lectures and even long mp3 DJ sets.

4. Recording: Like its entire kin, the USB 2.0 GMini is recognized by most newer PC’s as a hard disk device, loading music is as simple as drag and drop. Unlike much of the competition, this unit also allows you to plug any line in source (Stereo, SPDIF, Digital Input/Stereo Analog) and record in MP3 (up to 192kb/s) or WAV format. You can then use the directional pad with the on screen keyboard to name the file either before or after recording. Naming a file this way is long but it’ll do in a pinch.

5. Voice Recording: Although this is a feature generally focused on students who might like to record lectures, I used it to record practice sessions for presentations and create audio notes I can e-mail later. Unlike the Ipod, the GMini 220 comes with its own built in microphone that records up to 112kb/s. I found the clarity to be great and it made for enjoyable recordings. If you want a professional result, the line in accessory has a second port you can use to plug in a high-end microphone.

6. Photo viewer and storage: You can view pictures on the device, however this is not the most important option since images are only displayed in monochrome. The amazing feature is the Type 1/Type 2 Compact Flash card slot on the side of the unit. If the CF card in your digital camera is full, plug it into the unit and with two clicks, all your pictures are copied into the unit’s hard drive. Slap it back into your camera and you’re ready to roll again. This makes it one of the smallest CF backup drives on the market. When you get home, simply plug in the GMini and drag and drop your saved images to your main PC. Why pay hundreds for a huge CF card when you have a 20 gig drive in your pocket? Sweeeeet.

So is the unit the utmost in perfection… of course not. But the cons of this device are so overshadowed by the pros that they barely register with me. Here is what I found that could use improvement.

1. Battery power came in at 7.8 hours of continuous play. About an hour short of the Ipod and well short of a few others, such as the Dell DJ.
2. The unit only supports CF cards so those with SD card cameras won’t be able to make use of this feature. This is of course resolved with the use of an adapter but that becomes one more thing to lug around.
3. There is a 2 second delay the first time you move from one menu to another (drive startup). Subsequent moves are near instant.
4. A color screen would have made the picture viewing mode more useful.
5. Games. Apple had a really bright idea when they included some basic games into the iPod. Archos would do well to offer some of the same in the Gmini.

If you’ve read this far, you already know that my conclusion is in effect forgone. I absolutely love this device and couldn’t be happier about my purchase. If I pick up the line in remote later on, it will bring my total outlay (less taxes of course) to just under $450 CDN… Now that’s what I call value.