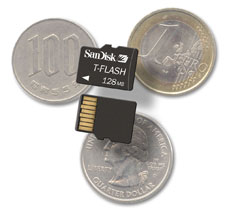 SanDisk on Friday introduced SanDisk T-Flash, the world’s smallest removable flash memory storage format. It is similar in size and function to embedded flash memory but can also be readily removed and upgraded to allow for a range of memory capacities as well as interoperability with other consumer electronics devices. Approximately the size of a fingernail, T-Flash is designed for new mobile phones that are compact yet fully-featured with storage-intensive multimedia applications such as digital cameras, video capture and playback, MP3 players, video games, personal organizers, Multimedia Message Service (MMS), email and voicemail capabilities.

The exceptionally small size of T-Flash (11mm x 15mm x1mm) represents approximately one quarter of the volume of the smallest removable flash cards available on the market today and allows handset manufacturers to incorporate significant amounts of removable storage capacity into their progressively smaller handsets without changing the physical size of the phone. To realize the small form factor, T-Flash uses advanced packaging technology and SanDisk’s latest NAND MLC flash memory and controller technologies. This technology is employed in SanDisk’s miniSD and TriFlash products and is a proven low cost/high volume production technology.

Motorola announced at the 3GSM Congress in Cannes, France, the Motorola E1000 and the Motorola A1000, two 3G phones that will use the 32MB T-Flash. These two phones are expected to be available in the second half of this year.

Pricing and Availability
SanDisk has started sampling T-Flash to OEM customers. Volume production is expected to commence in the second quarter. Pricing ranges from $14 to $39 for capacities that range from 32MB to 128MB.

Availability of T-Flash at retail outlets is expected later in the year in support of the rollouts of these new handsets in various geographies.

[Update] Sandisk has changed the name of T-Flash to TransFlash.