Philips has introduced two new handsets at 3GSM World Congress, the Philips 759 and 755 mobile phones have integrated VGA cameras, 7MB memory and a 128×160 TFT colour screen. The cool thing about device is that you can take a snapshot with the camera, write text notes on top, and even attach graphics to the image before sending it as a greeting via MMS. The ‘Snap, Tag & Send’ feature works directly on the touch screen LCD.

Philips is to introduce a new way of communicating by adding a new level of fun, creativity and personal expression to wireless multimedia messaging with the launch of two GSM mobile phones – the Philips 759 and 755. 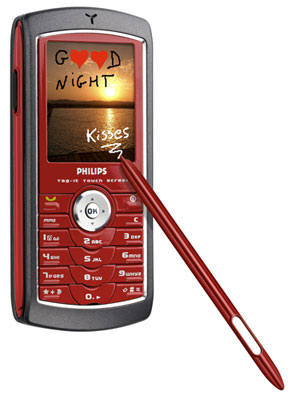 The 759 and 755 phones feature Philips’ novel ‘Snap, Tag & Send’ concept for sending (via MMS) personalized photos, drawings and even handwritten notes to family and friends thanks to the built-in touch screen.

With both phones featuring integrated VGA cameras, users can easily snap a picture, ‘tag’ a message by writing or drawing directly on the touch screen, and send it in just a few seconds. It’s even possible to record sound clips and add them to MMS messages.

The integrated camera is activated simply by sliding back the protective lens cover, ready to snap the picture. The phones’ sophisticated digital imaging sensors also make it possible to snap pictures in the dark without a flash, using the Night Mode function. With just two clicks, a moment can be easily captured.

Captured images can be creatively edited on the phone itself using the phone’s built-in Creative Photo Editor software. Images can be easily transformed with color effects, sepia tones, grayscale images or negative colors. It then takes just a few clicks to attach the finished image to an MMS message, add a handwritten note, and send it.

The Philips 759 and 755 also feature a huge 7MB memory, big enough to store as many as 800 precious memories for instant recall whenever you want to view them or share them. Both models have a large 128 x 160 TFT display capable of displaying over 65K colors.

The 759 and 755 are also super-compact in size and weigh just 89g each, ensuring a comfortable and convenient pocket fit. And with talk times of up to five hours and standby times of up to 250 hours – more than 10 days – these phones offer some of todays longest operating times.

Create a personalized sound experience with BeDJ
The new Philips 759 and 755 mobile phone both feature Philips’ unique BeDJ™ application, which lets users create, store and share up to nine distinctive music mixes from either downloaded WAP sources (operator service dependent), or tracks and sound embedded in the phone.

As a real-time composer, BeDJ brings out the creativity in people, with its Music Mix Panel enabling users to mix up to nine tracks, choose an instrument for each music track, change the tempo and volume of the sound and share the results with friends via MMS thus a very easy way of mixing your own ring tones.

The Philips 759 and 755 will be introduced in Europe in the course of the third quarter of this year in selected countries.

To offer operators a flexible choice of products, Philips will also introduce the Philips 550 phone, which has most of the same features as the 755 and 759, with the exception of an integrated camera. An optional rotating camera accessory will be available for this phone. The 550 will also have a Brown Suede and Silver Silk color finish.