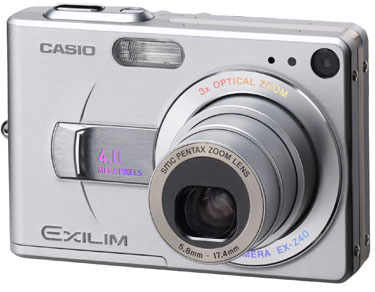 (Press Release) — Casio Computer Co., Ltd., today announced the 4-megapixel EX-Z40, a new model in the EXILIM ZOOM line of digital cameras with long battery life and 3X optical zoom. The camera will be available at retail the end of April, with an MSRP of $399.99.

Over the last few years the digital camera market has undergone rapid change. Not only have there been improvements in picture quality because of higher resolution, the great usability of digital cameras has also been the focus of attention as they became more compact with faster response and larger LCD monitors. One area of particular concern has been the battery life of these cameras per charge, with many users asking for digital cameras offering longer operation times. “Casio’s new EXILIM ZOOM EX-Z40 incorporates an EXILIM Engine, a newly developed compact image processing module with a 3 layer stack LSI that achieves high picture quality and speedy response using a 1.8V low-power system and makes the cameras’ compact dimensions possible,” said John Clough, president of Casio, Inc.

This new camera has a battery life of 2.5 times that of previous models (comparison between the EX-Z4U and EX-Z40), allowing up to 360 photos to be taken on a single charge (based on CIPA standard battery life measurement*).

Quick response
* The camera automatically switches to Auto Pan Focus when the shutter is pressed in one action
* Rapid start-up time allows you to start taking pictures approximately 1.6 seconds (with the flash off) after turning on the power
* Release time lag after pressing the shutter is approximately 0.01 seconds (with the flash off)
* Second high-speed playback scrolling of photos