Apple today announced that iPod mini, the world’s smallest portable music player ever to hold up to 1,000 CD-quality songs, will be available on Friday, February 20 at 6:00 p.m. throughout the U.S. iPod mini is encased in an ultra-portable, lightweight anodized aluminum body and available in a choice of five colors-silver, gold, pink, blue and green. Apple has received over 100,000 pre-orders for the iPod mini which was introduced last month.

“The response to iPod mini has been off the charts,” said Philip Schiller, Apple’s senior vice president of Worldwide Product Marketing. “iPod mini broadens the market for iPod by competing head-on with flash-based players. iPod mini costs only about $50 more than a 256MB flash-based player, yet it holds 16 times the music, is smaller, is easier to use and provides superior audio.” 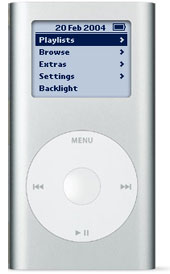 Smaller than most cell phones and weighing only 3.6 ounces, iPod mini builds on the success of the original touch wheel with Apple’s innovative patent-pending Click Wheel, which combines the ease and simplicity of the touch wheel with five push buttons for precise, one-handed navigation.

Optional accessories with the following suggested retail prices include the iPod Dock for $39 (US), in-ear headphones for $39 (US) and arm band for $29 (US). Laser engraving is available for iPod mini for $19 (US) and can include two lines of text with up to 23 characters per line.