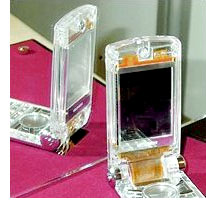 “Mitsubishi Electric Corp. unveiled a liquid crystal display (LCD) that can be viewed from both sides. The display, which the company says is a world first, was developed initially for use in clamshell-type cellular telephone handsets and could help make such telephones thinner and lighter.

At present, many clamshell-style handsets have two displays: a large main-display facing inwards and a smaller sub-display that faces outwards and is used to display basic information when the phone is closed and the main display out of view. Each of these displays typically consists of a glass LCD panel on which the image is shown and a backlight that sits behind the panel and projects light through it so the image can be clearly seen by viewers.”