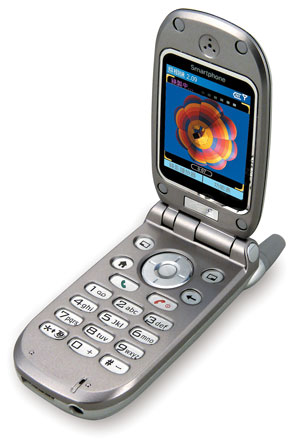 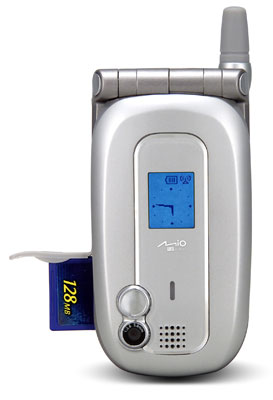 Mio Technology Corp. has launched the much anticipated Mio 8390 smartphone in Taiwan. Integrating Windows Mobile 2003 software for smartphone and Intel PXA262 application process, the Mio 8390 is a tri-band phone that provides the ability to handle both information and communications. In addition to all the features users expect from a state-of-the-art mobile phone—including color screen, digital camera, video recording capability, 40-polyphony ring tones, and engaging games—the Mio 8390 adds even more.

The Mio 8390 offers a screen that can display 260,000 colors, support for MP3 files as ring tones, the latest Java MIDP 2.0 games with polyphonic sound and tactile feedback, an extra-big 2.2″ screen, customizable interface skins, integrated MSN Messenger client, and super-large memory capacity. These features make the Mio 8390 the most richly featured next-generation smartphone on the market. At the same time, the Mio 8390 offers consumers a choice of dazzling silver and opulent red color schemes. The new smartphone is set for availability in the early part of February, and will be sold through Synnex International distributors throughout Taiwan at a suggested retail price of aroudn $480 USD.

The flip-cover clamshell design of the Mio 8390 incorporates a 300K digital camera, with a zoom lens and adjustable focus and brightness. The built-in camera provides a four-shot burst mode, five-step zoom, and support for night photography. With the Mio 8390, all of life’s most captivating moments can be quickly captured in clear, richly detailed photographs. The Mio 8390’s multimedia playback and video recording capabilities enable the user to shoot and view video as well. And with the Mio 8390’s generous 16MB of storage memory, you can film sixty 15-second video clips—a total of 15 minutes—with sound to boot. And as if that were not enough, you can always add SD/MMC memory cards for shooting unlimited amounts of video, so no important event need go unrecorded. The Mio 8390’s transflective big 2.2″ screen, capable of displaying 260,000 colors, is great for browsing photographs, viewing video you’ve shot, or watching movies you’ve downloaded—even outdoors in bright sunlight.

40-polyphony ring tones are no longer a rarity, but the Mio 8390 not only provides twenty-five such ring tones for users to choose from, but even supports the use of MP3 ring tones. Users can take MP3 versions of their favorite songs, and set them for use as ring tones (see note). This does away with the embarrassing situation of mistaking an incoming call on somebody else’s phone for one’s own due to identical ring tones. By allowing users to switch ring tones as they please to suit a particular mood or circumstance, the Mio 8390 opens up new avenues for self-expression and personalized style.

The Mio 8390 integrates an extra-large 2.2″ screen that can display 260,000 colors. And its Java MIDP 2.0 games with their vivid audio and tactile feedback are a dramatic advance in audiovisual impact over the games found on phones that support only the Java MIDP 1.0 specification. Mio 8390 users can enjoy more captivating 3D games on their phone, ensuring that even a short interlude waiting in line or riding a bus can turn into a source of fun. The Mio 8390 also provides skins, letting users switch and even create their own, to give their phone a unique look. It should be noted that a skin differs from the PC wallpapers with which most people are familiar. Generally speaking, when a user changes the wallpaper on their PC screen, only the background is changed. However, all the other elements on the screen—such as icons and text labels—remain the same. The use of skins however not only allows users to change the background picture, but also allows them to switch items whose appearance does not satisfy them. The user can create custom combinations of screen elements to make the phone truly a reflection of individual taste and style, and even a personal symbol. Skins thus satisfy the desire of users for individualization, and their need to set themselves apart from the crowd.

Talk to your heart’s content when and where you want
In addition to the functionality of an ordinary mobile phone, the Mio 8390 also offers the ability to use MSN Messenger to chat online with friends. With the Mio 8390 in hand, even when no Internet cafés or computers are handy, you can send and receive instant messages. Moreover, you can also synchronize the data on the Mio 8390 with Outlook on your PC, send and receive e-mail, and browse the Internet. The Mio 8390 lets you keep up with the state of the world, both your own corner of it and the farthest reaches of the globe, so you won’t miss anything important.

The Mio 8390 comes with 16MB of usable memory, allowing the user to store data for up to 10,000 contacts, or 1,300 photos. If the Mio 8390 is used to film video, a full 15 minutes can be saved in the built-in memory. If a 128MB memory card is utilized, an additional 90 minutes—the length of a feature film—can be stored. The Mio 8390’s spacious memory capacity spares devotees of today’s highly mobile, information-rich lifestyles the need to worry about not having all their contacts right at hand. Roaming freely, they no longer need carry reams of printed documents or notebook computers with their multi-kilogram bulk to maintain access to key information—enabling them to work more efficiently, and enjoy their leisure time more fully.

According to IDC research, from 2002 to 2007, worldwide shipments of smartphones will show average compound annual growth of 85.9%. Additionally, handheld wireless communications devices based on Microsoft platforms are projected to see average compound annual growth rates of 75%. The Mio 8390 is set to ride the rising wave of popularity for Microsoft OS-based smartphones, and rapidly establish a strong presence in this rapidly growing market.