Vodafone has announced the commercial launch of its 3G services in Europe. The first service from Vodafone will be the Vodafone Mobile Connect 3G/GPRS datacard, Europe’s first high speed lap top datacard.

With data rates of up to 384kbps, the Vodafone Mobile Connect 3G/GPRS datacard will enable Vodafone customers to access all their usual office applications like e-mail, calendar and internet at up to ten times the speed of GPRS. This will enable customers with a lap top to work anywhere just as if they are in the office.

The greater data speed of the Vodafone Mobile Connect 3G/GPRS datacard, coupled with its reliability and ease of use, will generate greater business productivity and enhanced responsiveness from mobile workers.

Vodafone Mobile Connect 3G/GPRS datacard will be available in Germany, Italy, the Netherlands, Portugal, Spain, Sweden and the UK over the next four weeks. The commercial launch of the 3G datacard follows successful customer trials conducted across Europe with thousands of business customers. 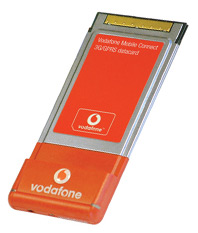 3G coverage is currently offered in most Vodafone markets in major cities and an increasing number of transport routes. When outside of 3G network coverage, the Vodafone Mobile Connect 3G/GPRS datacard automatically switches to Vodafone’s GPRS network, which offers full coverage, meaning Vodafone customers will have continuous access to their normal office applications. 3G coverage will be expanded continually by Vodafone over the next few years.

Customer trials of Vodafone’s consumer 3G service, which will enhance the Vodafone live! offering, are currently being conducted with selected Vodafone customers across Europe. Initial customer feedback is positive and Vodafone will introduce a consumer service in the next few months, with an enhanced range of 3G devices and services becoming available later in the year.