Lexar announced at PMA that it has doubled its highest capacity SD memory card to 1GB, with a top transfer speed of 60X, or 9MB per second write. Lexar Media will offer SEcure Digital cards in capacities of 32MB to 1GB. Lexar’s 1GB Secure Digital memory card will be available this spring, with an estimated retail price of $500. 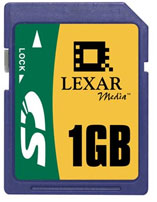 1GB of memory capacity is equivalent to storing over 500 high-resolution JPEG images (with a 4 megapixel digital camera), 16 CDs worth of music, or close to 6 hours of MPEG 4 digital video – on one compact, interchangeable memory card.

“Consumers continue to demand greater storage for their cameras, MP3 players and PDAs,” said Dave Klenske, Director of Product Marketing, Lexar Media. “The freedom associated with more storage space is incredible, and our new 1GB Secure Digital card will satisfy those who prefer to use their consumer electronics devices without limitations,” he added.

Lexar’s 1GB Secure Digital memory card will be available at consumer electronics stores worldwide this spring, with an estimated retail price of $499.99.