The iFP-599T is the latest addition to iRiver’s successful line of award-winning portable music players. The iFP-599T comes standard with 1 GB of internal memory and offers consumers the ability to record MP3s on the fly from any source.

The iFP-599T holds up to 34 hours of music and plays up to 28 hours from a single charge to its rechargeable lithium-ion battery. In addition to playing MP3, WMA and ASF music files, the iFP-599T allows customers to store all types of files when it is used as a portable drive.

iRiver also announced today the iFP-595T, which has the same features and functionality as the iFP-599T but comes with 512 MB of memory. Both players are loaded with features, including a built-in FM tuner with presets, line-in MP3 encoding, voice-activated voice recording as well as FM tuner recording functionality. The players are also compatible with the latest version of the MoodLogic Software which offers an intuitive solution for users to create mixes based on genre, mood and tempo rather than simply by artist and track names. 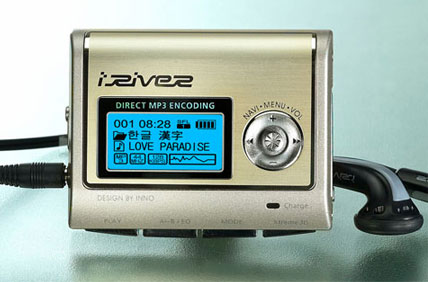 “As the leader in flash memory players, we designed the iFP-500 series to set the bar again for best design, feature-set and capacity,” said Jonathan Sasse, president of iRiver America. “We are proud to continue providing the MP3 category with superior products, and the iFP-599T is clearly leading the way.”