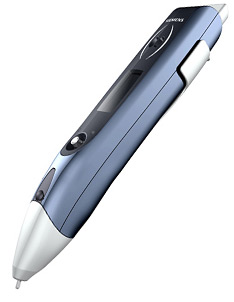 Siemens has announced their new products for display at CeBIT in Hannover, Germany this year running from March 18-24.

One new product is a rugged shock-resistant handset built to withstand water and dust. It is being described as the “rightful successor of the now legendary ME45.” Features include a VGA camera for still photos and video as well as a large display for improved mobile gaming enjoyment.

Siemens will also be highlighting a fixed cordless phone with an integrated camera and MMS functionality for sharing photos immediately with friends and family over a fixed network.

The new tri-band mobile phone packaged in an unusual shape, which Siemens’ is calling the PenPhone, lets users write virtual telephone numbers on anything and enter them in that form. Due to the PenPhone’s integrated handwriting recognition, SMS messages can be written directly into the mobile phone. This product is being displayed in the innovations area and it is not certain whether the PenPhone will be going into serial production.

Siemens mobile reported they will be launching other new devices into the market over the coming weeks prior to CeBIT.