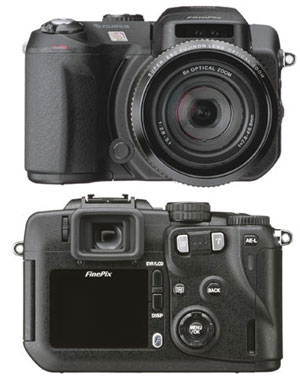 Fujifilm will be releasing the successor to the S2 Pro later this year. The FinePix S3 Pro digital SLR will use 4th Generation Super CCD SR sensor will use 6.17 million S-pixels and 6.17 million making a total 12.3 million pixels recorded. The new technology for the SR sensor doubles the photodiodes, and produces images with dynamic range four times greater then single-pixel technology.

This year will see the eagerly-anticipated launch of the FinePix S3 Pro –successor to Fujifilm’s critically-acclaimed FinePix S2 Pro digital SLR. Set to confirm Fujifilm’s status as one of the top three digital camera makers, this model has been conceived as the camera of choice for photographers who wish to achieve image quality worthy of Fujifilm’s professional film heritage.

This camera will be a breed apart from all other DSLRs because of its sensor and processor technology, without doubt the most important components within any digital camera. The FinePix S3 Pro’s 4th Generation Super CCD SR sensor will use 6.17 million S-pixels and 6.17 million .

The camera is designed around the long-established Nikon F-mount, and will have two shutter release buttons to ensure comfortable shooting in both landscape and portrait orientations. A further improvement on the S2 Pro is that power is provided by four AA batteries.

The FinePix S3 Pro’s Intelligent Flash with D-TTL full-aperture exposure metering will enable photographers to achieve outstanding results with compatible Nikon DX-series Speedlights. Appearing for the first time in a Fujifilm digital camera, this will allow a new level of creative lighting options for FinePix S3 Pro users. What’s more, the PC sync connection will allow strobes or other external flash systems to be connected for ultimate studio connectivity.

The camera will accept both xD-Picture Card™ and Microdrive™ media, for more flexible storage. It incorporates a newly-developed, bright two-inch 235,000 pixel LCD monitor (with approximately 100% frame coverage) alongside a second LCD data display for information on settings. And for improved data transfer speeds, the camera is set to offer both high-speed IEEE1394 and USB 2.0 interfaces.

Feedback from customers on the design and functionality of the FinePix S2 Pro was an integral part of Fujifilm’s design process for its successor. As a result of this input, and the success of the FinePix S2 Pro, Fujifilm has retained the camera’s solid, one-piece body made from durable polycarbonate, as a basis for the FinePix S3 Pro.

Adrian Clarke, Director of Consumer Products, Fujifilm UK, said, “For many years, the world’s top photographers have chosen to load their cameras with Fuji film, to produce the very best images from their cameras. Once they see the images produced by the S3 Pro’s Super CCD SR, we are confident that Fujifilm will be their choice for years to come.

“Rather than follow the trend of removing features from the digital SLR, our mission has been to improve on a top-class product. Almost all the development effort is being focused on where it matters most – the imaging sensor and processing. This announcement reconfirms Fujifilm as one of the three leading developers of digital SLR cameras.”

Pricing and availability of the FinePix S3 Pro will be announced soon.