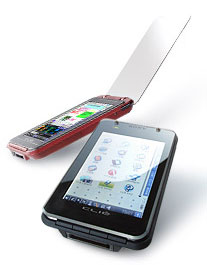 Both the Clié TH55 and the Clié TJ37 run Palm OS 5.2 with Motorola’s ARM-based i.MXL processor. The cpu clock speed is 200MHz, but on average loads runs between 8MHz and 123MHz similar to Intel’s SpeedStep technology.