Samsung Korea has unveiled three new handsets to be released this year, the SGH-D410 Slider Phone, the Samsung i530 Palm OS Smartphone, and the E600.

As well as VGA photographs, the D410 will record small 30 second film clips in motion JPEG format, unfortunatly this will not work with MMS and consumers will only be able to view videos on the phone. Photographs can be transferred via MMS, E-Mail, or Infrared. The D410 weighs 116g and measures 98mm x 49mm x 24mm.

The D410 memory is ten megabytes, three are allocated for videos, another three for photos and the rest is divided between MMS, Java Downloads and photographs.

The E600 is also a video phone with capabilities of capturing 30 second film clips. As the D410, the E600 cannot send video off the phone, is this a security feature or a lack of feature on Samsungs part? This handset features ten megabytes, three for video, five for photographs, and the rest for MMS, Java, ring tones etc.

A successor of the i500, the impressive Samsung i530 will without a doubt corner the Smartphone market. Shipping to over 22,000 VIPs, sportsmen and officials at the Olympic summer games in Athens.

The phones are expected to hit store shelves sometime this April or May. No price has yet been determined. 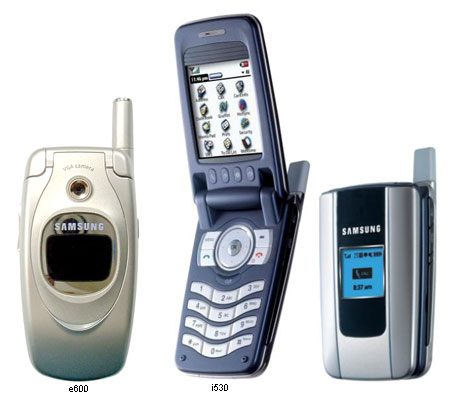