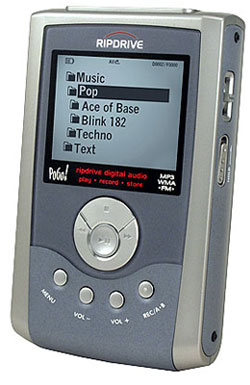 RipDrive has a built in FM recorder allowing you to save your radio broadcast. It also features Direct Encoding, and doubles as a Digital Voice Recorder and can connect to Windows ME, 2000, XP computers without drivers.

Moderatly priced at $349.99, the RipDrive is $75 more then a 30GB iPod or Creative Labs 30GB Nomad Jukebox Zen, but these lack the FM recording feature. The RipDrive will also available for $249 without a drive.

“PoGo! continues to offer the latest in cutting-edge technology products to the consumer,” stated Jim LaVoie, the Company’s President.