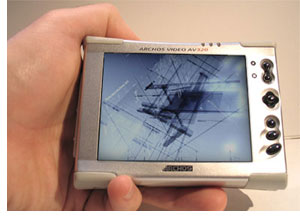 2003 was a great year for gadget geeks, from the evolution of handheld MP3 players to the feature packed mobile camera phones. Another device sending waves through the mobile market is the emergence of the Personal Video Recorder.

The idea of keeping your multimedia collection in your pocket has made many electronic geeks, such as myself, drool. Archos, a leader in multimedia handheld devices, has done just that. The Archos AV320 Personal Video Recorder has exceeded expectations for a first generation PVR. This feature packed device comes with a 20 GB hard drive to store your collection and a crystal clear 3.8” inch LCD screen to view it on. But the feature list doesn’t end there.

Ergonomics
The AV320 is a slick looking device with functionality in mind. To maximize the viewing area Archos extends the video screen almost to the edge of the device. In order to protect the plastic view screen the casing is designed with rubber risers so that your screen will never touch the surface it rests on.

MP3 Functionality
With the players such as the iPod, Zen, and iRiver there was a lot of pressure on Archos to ensure that the device exceeded expectations in the MP3 category. It is very hard to compare this unit to the other hard drive based units because the AV320 blows them out of the water. The AV320 not only gives users MP3 playback, but also allows you to record music through various interfaces. On top of that it includes a microphone that allows you to record anything you want. Windows Media Audio files are now supported with the new 2.0.0 firmware upgrade (no Digital Rights Management).

The OS has a neat looking player that has a pretty nice graphical interface, where you can setup play lists.

You can record via different inputs, external microphone, built in microphone , analog in, and SPDIF-IN. It has the ability to record in MP3 and PCM (wav) format. The limits are as follows;

Digital Picture Viewer
You can copy pictures to your AV320 and view them on the LCD screen, as well as zoom in 3x or rotate pictures on your screen using the joystick. The only setback is that loading times on large image files can take quite a while. The picture viewer only allows you to view JPG and BMP, no RAW support yet. An external optional media card reader can be purchased, this allows you to copy pictures from your digital camera media directly onto your AV320.

Video Capabilities
The Archos has various video viewing and capturing capabilities. It is capable of playing MPEG-4 SP (Simple Profile – DiVX 4.0, 5.0 and XiVD) video files at 640×368 at 25 fps in AVI format. The player currently does not play MPEG1, MPEG2 or WMV files. It will also only play 1:1 interlaced Divx and Xivd files with a bit rate less than 1200 kbits/s. In order to view movie files they will need to be converted to a supported format. A very time consuming task that cannot be avoided, especially if you have a large collection as myself.

Video Recording and Editing
Video recording with the Archos has been made easy, you simply connect the Digital Video Recorder 100 adapter to the side port and begin recording. The DVR100 add-on comes with S-Video and RCA inputs. The AV320 records at 304 x 224 @ 30 fps in AVI Divx format. The sound is recorded in MP3 format @ 192kbits/sec.

Archos has recently released version 2.0.00 of their portable media center operating system. With this came the introduction of video editing. We tested out this new feature when we backed up a DVD to the Archos.

The editing interface is also simple; you just mark a line to start your edit, and another to finish. This allows you to either crop the selected video, or cut it out. After that is done you can either save your changes or write it to a new file. If you choose to save your changes all it does is mark your video where you edited it and not play the sections that you marked, it doesn’t re-make the file, thus leaving you with the same file size. If you tell it to write a new file, it will re-encode the video into a smaller size. One drawback is that it takes a long time to do this. In our case it warned us that it would take ~21 minutes to write to a new file. We timed it and the actual time was 25:52 min. The end product was a movie 1h 44m 36s long at 1.268 gigabytes.

Video Conversion
The Archos also comes with desktop video editing software that lets you convert movie files into formats the player can handle. At first I had a bit of trouble with my encoded movies, the audio kept playing back out of sync. I emailed Archos tech support and they were quick to respond with a solution. They informed me that I was missing certain audio and video codec’s, and needed all the correct ones installed for it to encode properly.

Archos provides a modified front end to VirtualDub, this lets you convert videos to compatible AV320 playable format. If you would like to use other programs like Dr. Divx you would to use the following settings;

It takes quite a long time to encode a video depending on the speed of your computer.

The AV320 device now comes with a 3.3 mega pixel camera add-on that plugs into the side of the device via the universal side port. The AVcam300 comes with an optical 3x Ricoh Zoom lenses with a focal length of 6.2-18.6mm. On the back of the AVcam there are 2 buttons for near and far zoom, and 2 LED’s that indicate that the auto focus is set and the flash is ready. The zoom lens takes a while to zoom in and out, this makes the entire recording process feel unresponsive and sluggish at times. The zoom increases in increments of .25x starting at 1.0x all the way to 3x. The camera seems to have very poor low light focus, this makes almost all indoor night photos underexposed, with or without flash. I would recommend not using this to photograph indoors at night unless you have a very well lit room. Another disappointing factor is the colours do not show up as vivid and true as they should, everything is a bit darker than they actually were and at times had extra redness to them.

Below are several samples of the camera’s imaging capabilities, click on a photo to view original image (the salad was delicious, unfortunately it looks a lot worse here).

Conclusion
Archos has outdone itself with this little device. There are other PVR devices out on the market but from what we can see, Archos is the leader in this department. The quality of their LCD has to be seen in person to give it justice. The ability to record directly off any source alone justifies the purchase of this unit. For the person who is always on the road and doesn’t want to carry a laptop around with them for entertainment purposes, the AV320 is perfect for you. Hopefully in the near future, we will see increased compatability and better quality cameras, specifically more video formats supported.

If you don’t have a dedicated machine to continuously encode your movies, it becomes difficult to fill your AV320 20GB model with media that you can watch. If thats not enough, and you need more Archos also has the AV340 40GB model or the AV380 80GB model.

· Crystal clear 3.8” LCD screen
· Video playback on device is very clear
· Durable
· Great video playback quality on device
· Ability to record and edit videos on the handheld
· Great quality voice recorder
· USB 2.0
· Protected LCD screen
· Ability to disable the joystick (a little sensitive sometimes)
· Record MP3s
· Ability to use the device as a portable hard drive
· Easy to setup and save play lists
· Very quiet, can hardly hear the HDD
· Many, Many, Many optional add-ons

· A lot of glare on the LCD screen
· Camera/Camcorder zoom is slow, also not fluid
· No stand to hold device vertical
· No support for MPEG or WMV video
· No external speaker
· Battery only lasts ~3 hours when watching videos