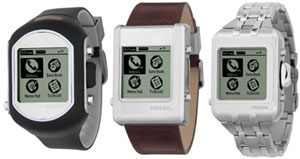 The Fossil PDA Wristwatch never made it to a store shelf, Fossil has discontinued the line of watches according to Wired. Amazon began taking pre-orders for the watch back in June of last year, but has recently updated the product status to “Discontinued”. Fossil claims that quality problems with manufacturing of their 1-inch screens were the downfall of its release. Too bad, it looked like a nifty gadget.

The watch won Comdex best of show in 2002, but Fossil may never have another chance to corner the Palm OS PDA Wristwatch market again. Fossil and other manufacturers have moved to develop MSN Direct watches, such as the newly released Suunto n3 Wireless Watch.

On another interesting note, Fossil is still paying for Google ad placement for the search term “pda wristwatch“, yet they have no plans on releasing this device.