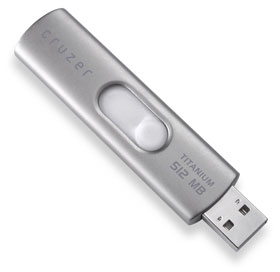 Cruzer Titanium, a USB 2.0 hi-speed flash drive, is one of the fastest USB type 2.0 flash drives on the market with a write speed rating of 13 megabytes (MB) per second and a read speed of 15MB per second. Cruzer Titanium, along with an expanded portfolio of new Cruzer USB storage drives, was launched at a press conference at the Consumer Electronics.

The new flash drive’s titanium-coated metal casing is hardened to provide extra protection against the inevitable rough handling encountered in a typical workday. Cruzer Titanium will start shipping to stores this month and has a suggested retail price of $199.99 for the 512MB version. Higher capacities are planned for future introduction.

Eric Bone, SanDisk Cruzer retail product line marketing manager, said, “Cruzer Titanium is the flagship product in our USB drive line and, we believe it is the premier USB flash drive on the market today. This is easily the most durable and rugged USB flash storage device on the market with construction similar to that found in aircraft and medical instruments. Many other USB flash drives are made out of plastic, and consumers have found that some of these drives can break rather easily.”
Bone also noted “the increased speed of Cruzer Titanium ties in perfectly with the need expressed by many consumers for more storage capacity in USB type 2.0 drives.

Many USB drive owners, especially business people, carry numerous, large files on the devices and they need a high-speed drive to quickly and efficiently move their data. You get this high performance when you have a Cruzer Titanium and a PC or Mac that has hi-speed USB 2.0 connectivity.”

Cruzer Titanium comes bundled with the CruzerLock software. CruzerLock is a file encryption product that safeguards user-selected files or data from being accessed by others in case the device is lost or stolen.

The small-size storage device has a clip that allows it to fit into a pocket as easily as an ink pen. Or it can be carried on a key chain or worn around the neck. Cruzer Titanium’s thin, streamlined profile (3 inches long, 0.8inches wide, and 0.3inches thick) allows it to be plugged in without blocking adjacent USB ports. It is also backwards compatible with USB 1.1 systems. With its sleek, titanium-coated casing, a retractable USB connector and distinctive blue LED indicator, Cruzer Titanium is poised to become the benchmark for style and sophistication in the USB flash drive market.

Cruzer Titanium is “plug and play” with PCs and the Macintosh due to USB Mass Storage Class (MSC) compliance when used with Windows XP, Windows 2000, Windows ME, Mac OS 10.1.2+ and Mac OS 9.2.1+. A driver can be downloaded for Windows 98SE support.

At the press conference, SanDisk also introduced Cruzer Micro and the Cruzer Micro MP3 Companion, which provides MP3 player functionality when connected with the Cruzer Micro USB flash drive. With a size roughly equivalent to half a stick of chewing gum, Cruzer Micro is one of the smallest USB drives on the market. In addition, the company expanded its Cruzerä Mini family by introducing both 512MB and one gigabyte versions of the product.