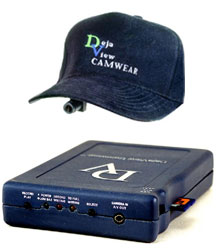 Deja View’s Camwear Model 100 will ship with Toshiba NAND flash SD cards, the device captures everything you see, and records it in a buffer so you never miss a second. You simply press the record button and the last 30 seconds of video with audio will write to a removable storage device.

These distinctive cameras utilize NAND Flash memory to enable an “after the fact” recording feature, which constantly writes both video and audio to a removable SD Memory Card with up to one gigabyte (GB) of storage. The SD Memory Card fits into a remote unit attached to the camera. By the time a user presses the record button, up to 30 seconds of video and audio already have been captured by the Deja View camera, enabling users to record events even if they missed the first moments of the action. The use of NAND Flash technology is a significant advancement in the development of sophisticated consumer video recording applications because it provides affordable, high capacity storage with a fast recording and erasing speed, enabling it to continually record the most recent 30 seconds of action monitored by the Deja View camera. In this application, NAND Flash-based SD Cards allows users to capture important life events on camera, even if they had not started recording yet. In a typical scenario with a conventional camcorder, a parent may not be recording at the moment his Little League player hits a home run, and captures only the running around the bases. With Deja View Camwear(TM), all the action has been monitored. When the record button is started, the 30- second “after the fact” feature enables all of the action to be captured as a digital video.

Deja View is the first company ever to offer consumers a complete range of fully-functional video camcorders which are, literally, small enough to be attached to the hat, eyeglasses, or exterior clothing of the user. The cameras, based on a number of patent-pending technologies from Deja View, are less than an inch long, and smaller than a nickel in diameter. Once affixed to the user, the camera is attached by a wire to a PDA-sized remote unit that clips to a belt or waistband, or sits in a pants or coat pocket.

“Toshiba’s SD Memory Cards, with small packaging, low power consumption, and reasonable cost, are the perfect complement to the innovative design and effortless operation of DejaView’s wearable cameras,” said Sid Reich, president and co-founder of Deja View, Inc. “Deja View selected Toshiba’s SD Memory Cards because of their high reliability rates and no need for external formatting out of the box. Consequently, product engineers were able to immediately incorporate the Toshiba cards into various camera designs, without concerns about performance breakdowns and time-consuming formatting. Ultimately, Toshiba’s SD Memory Cards enabled Deja View to deliver its products to market much more quickly and effectively.”

The first Deja View wearable camera, the CAMWEAR 100, retails for approximately $400, and will soon be available through most major consumer electronics retailers nationwide. The product includes a rechargeable battery that provides up to four hours of power for approximately 150 video captures. Using a USB cable or flash memory reader along with Deja View’s software, a user can download the video and audio clips to a PC or Mac, or output directly to a TV, VCR, or DVD burner. Video file viewing is made possible using Deja View’s software, Windows Media Player, RealPlayer, or other industry-standard multimedia players.

The SD Memory Card is a revolutionary flash memory storage product designed to meet the converging security, capacity, ergonomic and performance requirements of emerging audio, video, data and multimedia consumer electronics markets. The SD Memory Card was jointly developed by Toshiba, SanDisk and Matsushita, best known for its Panasonic brand name products. The card utilizes a 4-bit interface that enables it to have higher-performance capabilities (faster transfer rate) over the MMC, which employs a 1-bit interface. The SD Memory Card is the fastest-growing card format, with over 500 companies as members of the SD Association and involved with either selling or designing applications using the SD standard.