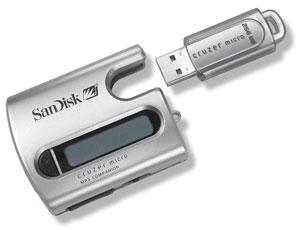 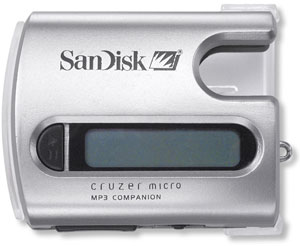 Eric Bone, SanDisk Cruzer retail product line marketing manager, said, “A small-size USB flash drive is a big priority for many of our customers. And you don’t have to sacrifice storage capacity with this tiny drive because we are initially selling three different capacities – 128, 256 or 512 megabytes (MB). With its stylish design and miniaturization the first word that comes to mind for most consumers is “cool”. Besides storing your music, Cruzer Micro also can be used to transport data files, images or video between home, office, school and other locations.”

Bone added, “It is quite exciting for the USB flash drive market to have a stand alone device such as the Cruzer Micro that can be expanded with the addition of the MP3 player. We think that this combination will give consumers an excellent value.”

The MP3 player has a typical battery life of more than seven hours on one AAA battery and comes with a backlit LCD screen to more easily identify songs that are playing.

Cruzer Micro will include CruzerLock, file encryption software that safeguards user data from being accessed by others in case the device is stolen or lost.

Cruzer Micro is “plug and play” with PCs and the Macintosh due to USB Mass Storage Class (MSC) compliance when used with Windows XP, Windows 2000, Windows ME, Mac OS 10.1.2+ and Mac OS9.2.1+. A driver can be downloaded for Windows 98SE support.