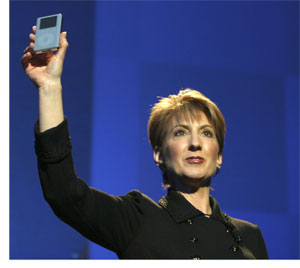 Hewlett Packard announced that they are going to use Apple’s Ipod innards to manufacture their own version of the Ipod. I guess they will call this one the Hpod? The only difference between the Hpod and the Ipod is the color. The Hpod is going to be blueish grey.

Hopefully this will lead to cheaper units, not just a way to get more people to use Apple’s iTunes.

Working to provide consumers with the most compelling digital content whenever and wherever they desire, HP and Apple today announced a strategic alliance to deliver an HP-branded digital music player based on Apple’s iPod, the No. 1 digital music player in the world, and Apple’s award-winning iTunes digital music jukebox and pioneering online music store to HP’s customers.

As part of the alliance, HP consumer PCs and notebooks will come preinstalled with Apple’s iTunes jukebox software and an easy-reference desktop icon to point consumers directly to the iTunes Music Store, ensuring a simple, seamless music experience. This offering is yet another way that HP is helping consumers enjoy more from their personal digital entertainment content.

“HP’s goal is to bring the most compelling entertainment content and experiences to our customers,” said Carly Fiorina, chairman and chief executive officer, HP. “We explored a range of alternatives to deliver a great digital music experience and concluded Apple’s iPod music player and iTunes music service were the best by far. By partnering with Apple, we have the opportunity to add value by integrating the world’s best digital music offering into HP’s larger digital entertainment system strategy.”

“Apple’s goal is to get iPods and iTunes into the hands of every music lover around the world, and partnering with HP, an innovative consumer company, is going to help us do just that,” said Steve Jobs, chief executive officer, Apple. “As the industry balkanizes by offering digital music wrapped in a multitude of incompatible proprietary technologies, consumers will be reassured in getting the same unparalleled digital music solutions from both HP and Apple, two leaders in the digital music era.”

According to internal HP research, more than 54 percent of current HP consumers download music to their PCs.

More than 2 million iPods have been sold since its introduction, solidifying its position as the No. 1 digital music player in the world. All iPods work seamlessly with the award-winning iTunes digital music jukebox software and the iTunes Music Store, which has sold more than 30 million songs, providing music fans with the best digital music experience on either a Mac or Windows® PC.

Beginning this summer, the iTunes software and a desktop icon guiding users to the music site will be preloaded on HP Pavilion, Media Center and Compaq Presario desktop and notebook consumer PCs.