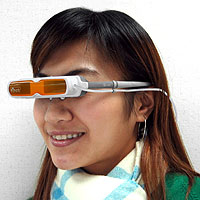 The Leadtek X-eye glasses-like headset permits users to view large screen SVGA data (800 x 600 picture elements) and DVD movies from PCs or other devices with a RGB output, while providing an equivalent screen size of a 15-inch notebook computer or a 60-inch TV-like high resolution view, while typically using less than 0.5 watts even with the dual display binocular system.

The display can be easily used as a second “virtual” monitor for notebook PCs for ease of editing multiple documents to provide multiple screens or for data privacy while traveling. The HMD connects to the RGB port on the back of most notebook PCs similar to a monitor or projector. With virtual second monitor capability, a user can view a document on the notebook screen while simultaneously viewing a second document on the headset screen. Using Windows(tm), the documents can slide back and forth between the virtual screen and the notebook screen for dual page editing or working with large spreadsheets. The virtual screen can also simultaneously show active email or even movies at the same time as documents, and either screen can be used independently.

K.S. Lu, chief executive officer and president of Leadtek, said “We are pleased to introduce this new economical, high performance, and high resolution stereovision capable headset for PC, PC DVD, and PC game users. eMagin’s OLED display power requirement is many times lower than that of LCDs, enabling the headset to be powered by a USB connection without separate batteries or AC power. The high visual quality provided by eMagin’s displays has enabled such a product to be created with great portability.”

Gary Jones, chief executive officer and president of eMagin, added: “We are excited to have our displays implemented in this first of its kind consumer oriented stereovision HMD. Our SVGA-3D displays were designed for this purpose. Leadtek has designed compact headset systems to comfortably provide a wide view image. Leadtek’s X-eye design is ergonomic, practical to use while traveling, and should open an entirely new class of consumer imaging headsets. Even when not used with stereovision, the images produced by this product are impressive.” 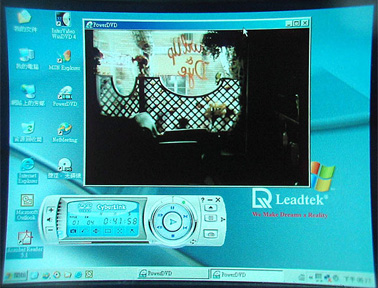