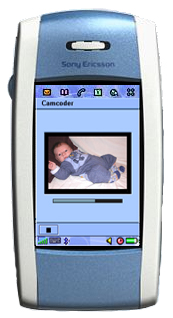 The Philips Camcoder is a high quality audio video encoder and player for the SonyEricsson P800 mobile handset. It provides real-time audio video grabbing and encoding in the MPEG-4/H263 video format as specified by the 3GPP standard. It is fully integrated into phone application environments such as MMS, BT, IR and e-mail. Recorded videos can be played back on all 3GPP compliant players such as but not limited to Philips Platform4 PC Player and Apple Quicktime 6.3.