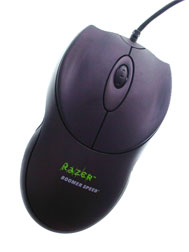 The Viper (1000) optical mouse is an important addition to the Razer Boomer Speed (2100) and Razer Boomer Control (1400) opto-mechanical models.

The Razer Viper utilizes a revolutionary 1000 DPI, “powered by karna precision” Optical Engine that provides for a true hardware-based resolution that is capable of tracking movement with greater precision than any non-gaming mice. Razer Viper Optical possesses the most advanced optical tracking system of any mouse to date. The result is unparalleled, explosive game play. Viper is more responsive, offers smoother movement and is faster than any mouse out there — other than the Boomer Speed and Control opto- mechanical mice.

At approximately the same time, Razer will begin shipping eXactMat, a two-sided specially designed mousing surface. Both sides were designed for hardcore gamers who demand the best in sensitivity and responsiveness. The grainy side is specified for low sensitivity “Control” players, while the smoother reverse side favors high revving “Speed” style. Razer General Manager Robert Krakoff says, “For nearly four years our customers have requested that we develop a mousing surface specifically for the Razer mouse.”

The eXactMat supports both ball and optical surfaces, no matter the gaming style of play.

Razer is anticipating a release date for the Viper in February 2004.

Detailed product features and specifications will be available at Razer‘s webpage. Anticipated retail price is under $50.