According to NE Asia — “Toshiba Corp has developed a hard-disk drive that measures 0.85 of an inch in diameter, smaller than the record 1-inch HDD that Hitachi Global Storage Technologies released in November, company sources said on December 13.

The drive, which is small enough to be used in mobile phones, can store up to two hours of high-definition moving images and just under 60 hours of music. Its tiny size will likely lead to the development of extremely small video cameras.

The 1-inch HDD developed by the US affiliate of Hitachi Ltd is used in digital single-lens reflex cameras and other products, but it is too big for mobile phones. Despite the smaller size, Toshiba’s HDD has a storage capacity of 2-3GB, equal to 2,000 floppy disks.” 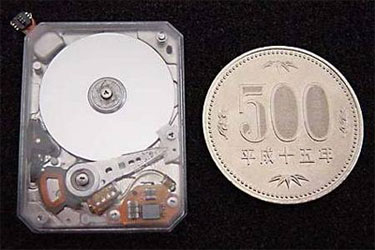