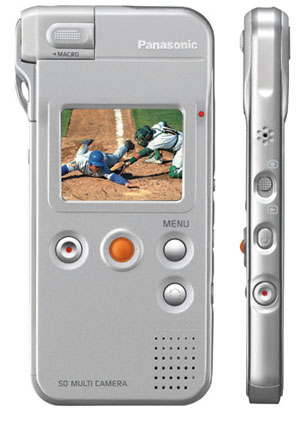 The folks at Panasonic have been really working hard at taking mobile technology from a portable aspect to a wearable device.

Having reviewed the earlier generation, the SV-AV10 back in June of 2002, I wanted to see how far the SV-AS10 had come along. My answer? They can do some pretty incredible stuff; but they still can’t pack it together like that without some compromises.

First Impressions
The SV-AS10 is a 2MP camera, MP3 player, digital camcorder, and voice recorder all built into a unit so thin it makes Kate Moss look like Anna Nicole Smith. At 103mm x 51mm and a mere 9.9 mm thick, the unit weighs in at a feather light 59 grams. I’ve got to give the engineers their kudos. Just playing with it for a few minutes really puts you in awe of their talents. If any of them are reading this and happen by London, Ontario, drop me a line and the beers are on me.

The hardware is solid and the swivel lens is simply an excellent way of both protecting it and taking self portraits. The graphical menu system is controlled by a jog ball that makes flying between menus a breeze. Unlike a joystick, you just kinda brush over it in the direction you want to go. It takes a little getting used to but it’s amazingly comfortable. On the software side, the options are laid out in up to 8 directions making your most likely choices easy to get to with one or two clicks.

Let’s break down the actual functionality of its 4 parts:

1. The Digital Camera
The device features a 2.MP camera with ten-second self-timer, multiple color modes, 4X digital zoom, macro mode, a built in flash and a swivel lens. I like my cameras in the nice and easy point and shoot variety with the option of messing with the settings when the mood grabs me. In this regard, the SV-AS10 does well. The features to play with are short but the auto settings on the point-and-shoot side work as expected. As an added feature, the SV-AS10 lets you record short audio clips with each picture. This is not a feature I generally use but you may find it handy to recall why you found it so poignant to shoot a picture of your buddy’s foot.

Except for a few gin enhanced hormone driven moments in the late 80’s, I’ve never claimed to be a professional photographer. I am however an avid photographer in the sense that I use the take-20-shots-to-get-1-perfect-one system. Would I use the SV-AS10 as my every day digital camera? Not quite. Although it is a 2MP camera capable of up to 1600 x 1200 shots, so is my trusty Canon S100 (2.1MP) which I’ve had for 3 years. And those who read their camera quality by MP rating alone are in for some disappointments in life.

Over the last few weeks I’ve taken dozens of shots and many turned out great. Unfortunately, most were just a little sub par. Here’s an example at full resolution, standing 3 feet away.

As you can see below, the SV-AS10 image is good, but definitely not as good as the Canon.

2. The Camcorder
Like allot of digital cameras out there, this one can also take short 320 x 240 videos (up to one minute each). This is never to be considered a camcorder replacement however. Like others of its kind, video appears slightly stuttered. This is because it is only recording at 10 frames per second. It does however make it great for sending short clips by e-mail. This device encodes them in Quicktime as opposed to AVI. Although I enjoy Quicktime as a format, many people don’t so I have to go through the process of converting them if someone isn’t willing to download a free Quicktime viewer. Editing the movies requires Quicktime Pro which is a pay product. One innovation here was in the way the movies are saved. When you transfer files to your PC, they each have a thumbnail of the first frame allowing you to see which video the file is without having to view it.

3. The MP3 Player
The device plays MP3, WMA and AAC Formats transferred to it via the provided software. Disappointingly, you can’t just slip in an SD card with your tunes on it. You have to do it via the PC software that comes with it. The same goes for play lists; you can’t make them on the fly. When in music mode, the 1.5 inch LCD screen just displays the track info. I wish they had used it to show a graphic equalizer. I’m told that it can display album art but I haven’t had any experience with it. The sound quality was nice and the provided ear buds with in-line remote are better than what you usually get in an mp3 device package. This is good as the player won’t work with any other kind. It’s not an MP3 player for the audiophile, but it is easy and functional for every day use.

4. The Voice Recorder
No complaints here. Although no competition against a professional voice recorder for audio clarity, it does about the standard slightly grainy PDA job of it which is all I really need. Unlike the camcorder function, the device will record voice for as long as it has memory. A 2 minute and 17 second memo I took came in at 1.06MB – In Quicktime format of course.

Conclusion
I expected this to be one of those overpriced leading edge toys. You’ve seen them before. They are the “Wow that’s really cool but I’m not paying an arm and a leg for it”. I was pleasantly surprised when I shopped around and managed to find the unit on-line for $279.99. The SV-AS10 is neither an exceptional camera, digital camcorder, MP3 player or voice recorder. It is however an exceptional value for what it delivers. If you want it all in one slim package and don’t mind the sacrifices, this may just be the coolest looking thing under your tree this year.