TOKYO, JAPAN — NTT DoCoMo, Inc. and its eight regional subsidiaries today announced the coming release of three new handsets in the 2G mova 505iS series: the SO505iS, a mega-pixel camera phone equipped to play extended-length video files; the N505iS, the first NEC-made camera phone in the mova lineup with 1.3 mega-pixel resolution; and the SH505iS, which comes with a 2.02 mega-pixel, auto-focus camera. The N505iS will be released on December 10, 2003 and the SO505iS and SH505iS will be released on December 12, 2003.

With the releases, the mova 505iS series will comprise five i-mode®-capable mobile phones equipped with mega-pixel cameras and other advanced features. 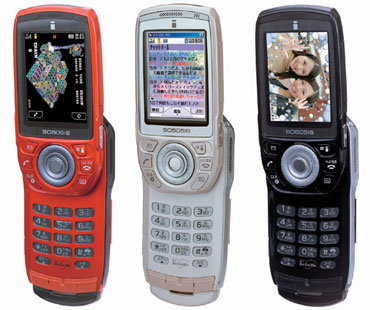 A Twin Window™ feature allows the screen to be split into two windows. The user can, for example, compose an e-mail in one window while viewing a i-mode sites in the second window.

An audio read-out feature enables users to listen to a computer-generated voice read their i-mode and chat mail messages.

Bundled software enables the user to modify portraits taken the camera phone. Facial expressions can be modified to communicate emotions such as happiness, sadness or anger. In addition, the photos — as well as downloaded images — can replace standard emoticons used in chat mail.

The N505iS is equipped with an audio recording/playback feature to store and listen to approximately five hours of music using a 16-MB mini SD™ memory card.

Auto focus works in four modes: normal, close-up, self-portrait and landscape. Focus lock enables subjects to be kept in focus even when placed off-center in the photo. This is DoCoMo’s second 2G camera phone equipped with auto focus. The P505iS, the world’s first auto-focus 2G phone, was released on November 12, 2003.

The phone’s main screen is a 2.4-inch, 262,144-color CGS QVGA LCD and the sub-display is a 1.2-inch 65, 536-color TFT LCD. The phone’s operation menu and incoming e-mails can with viewed on the sub-display. The sub-display can also be used while the handset is closed to send e-mail messages (drafts) stored in the phone.

The phone comes with a scheduler that files information by various categories, such as name and content. In previous models, scheduled information was accessed by navigating through several screens, but the SH505iS scheduler has a convenient standby screen for inputting dates to retrieve information quickly.

The new models will be available through all DoCoMo sales channels. The price of the handsets will be open (unfixed). Optional accessory kits for the N505iS, and the SH505iS, including battery pack, AC adaptor, desktop holder and 16-MB mini SD memory card, will cost 5,500 yen. The SO505iS optional accessory kit, which also costs 5,500 yen, comes with a 16-MB Memory stick Duo*.