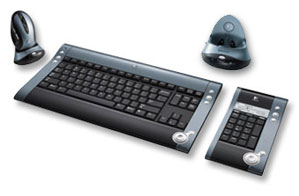 FREMONT, California — Logitech today announced that its wireless hub for the PC supports the latest Bluetooth phones from Sony Ericsson and Nokia; new PDAs from Toshiba, HP, and palmOne; as well as hands-free headsets from Sony Ericsson, Motorola and Nokia. Customers who purchase any of these new state-of-the-art mobile communications products can automatically take full advantage of Logitech’s recently introduced wireless hub – which bridges their PC and Bluetooth mobile devices – and the Logitech Mobile Bluetooth Headset. Logitech offers the wireless hub as part of a Bluetooth product lineup that includes the Logitech MX 900 Bluetooth Mouse as well as two new keyboard-and-mouse combination products, the stylish and widely acclaimed diNovo Media Desktop and the Cordless Desktop MX for Bluetooth.

With a Logitech wireless hub, the PC becomes a control center for Bluetooth mobile devices, enabling convenient synchronization between the PC and the calendars and address books that reside on a mobile phone or PDA. The Logitech wireless hub also integrates PC and mobile phone technologies to provide greater flexibility for voice and messaging communications – including the ability to use the PC to receive and respond to text messages sent to a Bluetooth mobile phone.

To help owners of these Bluetooth mobile devices achieve the best-possible experience with their new product and take advantage of the promise of the Bluetooth wireless technology, Logitech has developed a Web site to provide the latest information on compatibility and how to set up Bluetooth devices with a PC. Logitech’s Bluetooth resource center can be found at www.logitech.com/bluetooth

“Logitech is using the universal connectivity benefits of Bluetooth to provide a hub for exchanging information between a PC and mobile devices, without the use of cords or wires,” said David Henry, senior vice president and general manager of Control Devices at Logitech. “We’re committed to building a high-quality user experience into our Bluetooth products, which in turn enables users of the leading new Bluetooth devices to immediately realize the enhanced benefits of their new communications products.” 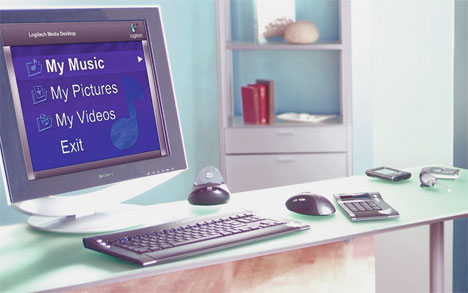 The Logitech wireless hub allows these compatible Bluetooth devices to connect to the PC to perform the following tasks:

— Print wirelessly to Bluetooth capable printers from the desktop PC.
— Wirelessly synchronize information (e.g., address book, calendar) stored on a mobile phone or PDA with a desktop PC.
— Manage Short Message Service (SMS) messages directly from a PC with the bundled Logitech Mobile Phone Suite for Bluetooth. The onscreen SMS notification feature keeps continuous communications simple by providing the ability to use the PC to respond to messages sent to the mobile phone. For a complete list of phones supported by Mobile Phone Suite please refer to www.logitech.com/bluetooth/howto.
— Download pictures taken from a camera-equipped, Bluetooth-enabled mobile phone to a PC.
— Use a Bluetooth wireless headset with the PC. A Bluetooth wireless headset with the PC allows people to use voice with instant messenger applications, listen to streaming audio or converse using a voice-over-IP application – with a wireless range of 30 feet from the PC.

Logitech diNovo Media Desktop, Cordless Desktop MX for Bluetooth and the MX900 Bluetooth mouse are all compatible with the Windows 2000 and Windows(R) XP operating systems.

The Logitech Mobile Bluetooth Headset is compatible with all Bluetooth equipped mobile phones using both the headset profile and the hands-free profile.