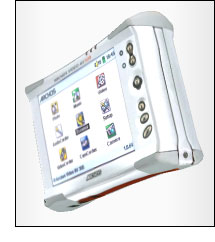 Archos has just announced a new firmware update slated for Christmas. The update for the AV320 and AV340 portable video players is a completly new OS. The main feature of the update is adding video editing capabilities and an entirely redesigned user interface for easier navigation. Yet again Archos has managed to stay a step ahead from RCA with the late release of the rival RD2780 jukebox.

ARCHOS, a global provider of innovative handheld entertainment and storage solutions, today announced the availability of new firmware for its successful AV300 line of portable video players and recorders. The new firmware update gives users enhanced video editing capabilities, a redesigned interface and the ability to record and play back WMA files. The downloadable firmware will be available later this month for free at www.archos.com.

Announced in June, the AV300 series is the industry’s first personal, portable video player that can record and play back movies with stereo MP3 audio, while also operating as a powerful MP3 recorder and player, personal photo player and storage device. The firmware update includes a new operating system that gives customers editing capabilities and an entirely redesigned user interface for easy navigation. Before the availability of the update, users could play and record videos on the go, but used the computer to edit their recordings. With the introduction of the new operating system, customers can edit their recorded video directly from the AV300 device.

Additional features include the ability to crop extra minutes at the beginning or end of a movie, as well as edit out unwanted scenes. With the easy-to-use interface, users can also save outtakes or favorite scenes from long video sequences to create short clips. Other advancements include:

— Record and Play back WAV Files. Geared toward professional musicians, this feature allows users to record and play back high-quality, uncompressed WAV files (PCM) at sample rates up to 48KHz.

— Play back WMA Files. With the new firmware update, the AV300 will be able to play back WMA encoded files for the increasing number of people who use this file format.

— Personalize Screen Background. Users will be able to personalize their screen background on their AV300 with favorite photos of friends, family or vacation scenes.

About the AV300 Series

The ARCHOS Video AV300 is the industry’s first true personal video player that can record and play back movies with stereo MP3 audio. Sporting the industry’s only high-resolution 3.8-inch color LCD screen, the Video AV300 series offers the most enjoyable video play back experience in any portable device. But the real power behind the Video AV300 is in its ease to record video from any video source. On the go enthusiasts are able to record their favorite video content direct from any video source, TV, DVD player or VCR.

The AV300’s out-of-box experience empowers consumers to take all of their entertainment anywhere and everywhere they go. Packing a powerful combination into a single consumer device, users are capable of recording, playing or storing a mix of up to 160 hours of near-DVD-quality video, 800,000 digital photos, 4,000 hours of MP3 music, 8,000 hours of voice recordings via the built-in microphone, and/or 80 gigabytes of data, depending on the size of the hard drive. The AV300 series is available with 20- 40- or 80-gigabite hard drives. For more information about the AV300 Series and the new firmware, please go to www.archos.com.