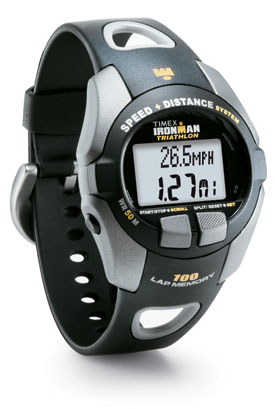 Garmin International and Timex have developed a new wrist watch that can accurately answer the all-important questions; how far and how fast?

The Timex Ironman Speed & Distance System consists of two pieces: a GPS receiver and a watch/monitor that are wirelessly connected by a radio signal. The receiver scans the skies for satellite signals looking for the best geometric solution (through a process called “triangulation”) and transmits precise speed, distance and pace readings to the watch in real time. While GPS technology is most commonly used as a navigational tool, the satellites are equipped with atomic clocks, making it possible to get speed and distance data with pinpoint accuracy.

In 1986, Timex changed the industry forever with the introduction of a sportwatch named for the world’s most famous endurance athletic event, the Ironman Triathlon. Since then, the Ironman brand has become synonymous with some of the most advanced product offerings from Timex. With the introduction of the Speed & Distance System, the Timex Ironman line further asserts its leadership position among performance sportwatches.

With the addition of GPS technology, the Speed & Distance System has the most comprehensive list of features ever offered in a Timex Ironman watch including: 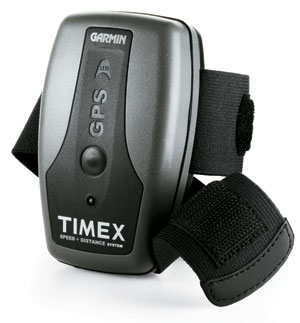 Remarkably, packing all of the foregoing features into the Speed & Distance System doesn’t compromise the watch’s familiar Ironman styling or ease-of-use, nor does it require that the watch be any larger than many of the other models in the world’s best selling line of performance sport watches.

“Timex leads the way in useful and cost-effective applications of the best new technologies” said Director of Advanced Products, Phil Brzezinski. “The Ironman Speed & Distance System, the first of its kind, illustrates Timex’s commitment to be at the forefront of wrist instrument technology.”

Garmin International, an industry leader in GPS technology, engineered the receiver to be comparable in weight and size to the latest generation of smaller cell phones. Strapped to the arm or clipped to the waist, the receiver’s slim profile and lightweight design makes it nearly inconspicuous to the wearer. Information is transmitted from receiver to the watch via digital FM signal, making it extremely resistant to interference from electrical sources such as overhead power lines.

“We’re proud to be associated with an industry leader like Timex and to deliver GPS data wirelessly to select Timex users,” said Garmin’s Director of Marketing, Gary Kelley. “This product introduces the convenience and reliability of GPS technology to a new consumer audience in a sleek, user-friendly package.”

Launching in April, the Timex 100-Lap Ironman Speed & Distance System will sell for around $225. In May, a 50-Lap version priced at around $200 will be introduced.