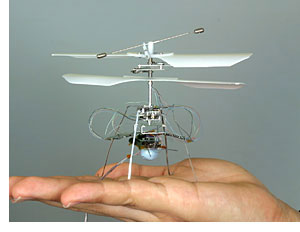 Tokyo, Japan — Seiko Epson Corporation has developed the uFR (“Micro Flying Robot”), the world’s smallest flying prototype microrobot. Epson developed the uFR to demonstrate the micromechatronics technology that it has cultivated in-house over the years and to explore the possibilities for microrobots and the development of component technology applications. The company displayed its latest offering at the 2003 International Robot Exhibition, which was held at Tokyo Big Sight on November 19 – 22, 2003.

Based on its micromechatronics technology, which is one of the company’s core technologies, Epson has developed and marketed a family of microrobots known as the EMRoS series, beginning with Monsieur, which was put on sale in 1993 and is listed in the Guinness Book of Records as the world’s smallest microrobot. In April of this year Epson developed Monsieur II-P, a prototype microrobot that operates on an ultra-thin, ultrasonic motor and a power-saving Bluetooth module that allows multiple units to be remote-controlled simultaneously. Using these robots, Epson also realized the world’s smallest full-blown robot ballet theater. In this way, Epson has played a pioneering role in research and development relating to microrobots and component technology applications.

The uFR, which will be shown at the exhibition, causes levitation by use of contra-rotating propellers powered by an ultra-thin, ultrasonic motor with the world’s highest power-weight ratio and can be balanced in mid-air by means of the world’s first stabilizing mechanism using a linear actuator. Furthermore, the essence of micromechatronics has been brought together in high-density mounting technology to minimize the size and weight of the circuitry’s control unit.

By developing the uFR, Epson has demonstrated the possibility of expanding the activity range of microrobots from two-dimensional space (the ground) to three-dimensional space (the air). Epson intends to use the occasion provided by the exhibition to feel out the reactions of visitors, discover and test problems related to the functional use of space by microrobots, and thus to further concentrate its efforts on advancing its original micromechatronics technology and cultivating applications to meet future needs.