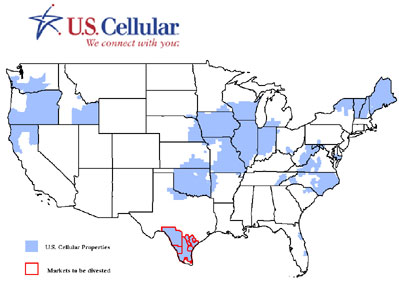 CHICAGO — United States Cellular Corporation today announced that it has entered into a definitive agreement to sell certain wireless properties to AT&T Wireless Services, Inc. of Redmond, Wash. for $95 million in cash, subject to certain closing provisions. The transaction is subject to regulatory approval and is expected to close in the first quarter of 2004.

The markets to be sold include MSA operations in Corpus Christi, Laredo and Victoria, Texas, as well as RSA operations in Texas RSA 18, 19 and 20. A complete list of the licenses can be found in Exhibit A. A map illustrating the properties to be sold is available at http://www.teldta.com/whatsnew/feature112003.html .

John E. Rooney, president and chief executive officer of U.S. Cellular, commented, “This transaction is further affirmation of our strategy to exit markets that are not strategic to the company’s long-term success. These properties, while valuable in their own right, neither complement the geographic footprint of the company nor strengthen its competitive position in its larger, more well-established markets.

“Proceeds from the sale may be used to reduce debt or offset the cost of building out several of the new markets we acquired recently from AT&T Wireless in another transaction or to fund spending requirements related to our technology upgrade to CDMA 1XRTT,” said Rooney.