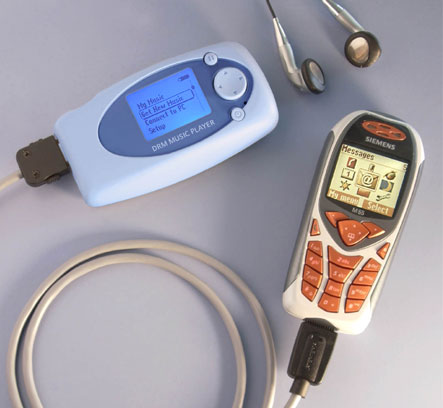 Downloading compressed pieces of music (aacPlus format) to the DRM Music Player (DMP) could not be simpler. A GPRS cell phone is connected to the DMP by cable or by infrared and the connection to the mobile service provider is established at the touch of a button. The Player (measuring 52 x 98 x 21 mm and weighing just 80 g) then displays the music titles on offer. It is possible to listen to extracts and save the music onto the player if desired.

Used to play songs protected by license, as well as standard MP3 pieces, the DMP is in fact a small PDA whose sole function is to download and play music easily via mobile phones. These can also be easily transferred from the computer to the Player via a USB interface. The music files are stored on a plug-in 64-MB SD memory card which holds up to 60 songs at a time. The card can be used both in the DRM Music Player and in the PC.

Audio files are compressed using MPEG-4 aacPlus. This is the world’s most powerful audio compression technology, delivering high audio quality even for the narrowband transmission channels used in mobile communications. The highly efficient aacPlus is thus the crucial factor in the technical and economic feasibility of mobile music services and is already being successfully used to transmit music. Since spring 2003 aacPlus has been used as a High Efficiency AAC Profile component in the ISO/MPEG-4 standard.

To ensure that copyright is not infringed, it is not possible to create pirate copies, thanks to Digital Rights Management (DRM) technology from Basle-based company SDC AG, which patented this DRM solution in the US and in Europe in 1996. SDC Java DRM technology is in use in both the internet and, with the introduction of the O2 Music service, now in the mobile market. It safeguards the licensing rights of music companies and singers, prevents the titles made exclusively available by the music companies from being copied without protection from the customer’s PC or DMP to other devices, and stops music files being transferred and played illegally on PCs.

Siemens Switzerland has joined forces with SDC AG and media specialist Yodoba/234 AG to form the “Music Over The Air Consortium” (MOC), offering a comprehensive end-to-end solution. From selecting the music and clarifying all legal aspects, through to compression, file hosting, protection against copying and the DRM Music Player, the mobile communications provider need have no worries.

If desired, all applications as well as compression and encryption processes can be performed on central Siemens servers in Zurich, Switzerland, and safeguarded round the clock. If a mobile communications provider opts for MOC’s music offering, a tailor-made solution can be tested, implemented and launched within a few weeks.

The cooperation between O2 and all major music labels means cell phone subscribers have exclusive access to the very latest hits. Songs can be made exclusively available for download onto the DRM Music Player up to one week in advance of the official release.

The DRM Music Player, which works with all major makes of cell phone, is known as a “White Label Device”. This means mobile providers can launch the Player as their own product and under their own brand. What is more, the DMP can be sold both with new cell phones and as an accessory to the installed base. At the same time mobile operators can make effective use of the powerful GPRS technology and move contents, which with the subsequent introduction of UMTS will be available in an even more comprehensive form.

“With the launch of O2 Music service, the development of the DRM Music Player and the work of MOC we have reached an important milestone in the mobile industry”, says Christoph Hilber from Siemens, who is coordinating the activities of the Music Over The Air Consortium.

In-depth negotiations are underway with several mobile providers in the US, South America and Europe. In addition, MOC customers can benefit from the experience gleaned from similar Internet-related music download projects. Here too, corresponding services will soon be launched using MOC technology.